Solomons' flood victims urge govt to live up to promises

Victims of devastating floods in Solomon Islands three years ago, many of whom are still living in makeshift housing, are calling on the government to live up to its promises.

More than 20 people died when the Mataniko River burst its banks in April 2014, wiping out the village in Kwa Valley.

After the floods, the government relocated residents to the hills above East Honiara, promising to help them rebuild and restore basic utilities.

Our reporter Koroi Hawkins during a recent trip to Honiara made the trek up to visit the community. 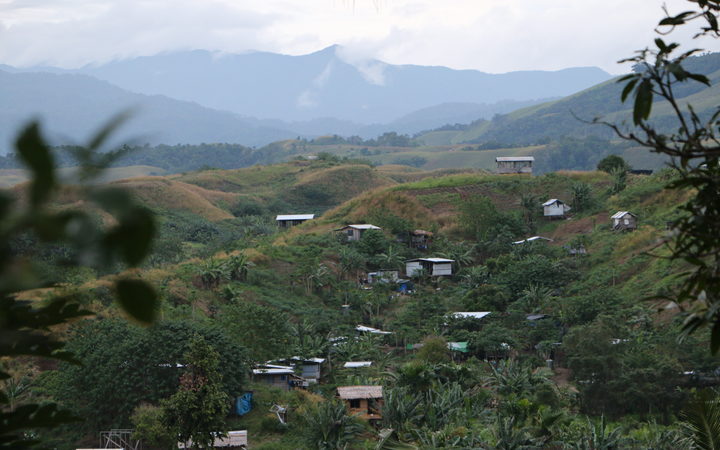 Darkness was falling by the time I reached April Ridge or April valley as the land allocated for the survivors of the devastating floods.

It was a bit of a mission finding the place and its residents seemed both surprised and happy to see me emerge from the swampy grassland I had crossed to reach them. I was told when it rained, the muddy footpath disappeared and was replaced by a bog.

The chairman of the tight knit community, Michael Fa'abona says they are not ungrateful for this land that the government gave them after the floods.

Mr Fa'abona says the government had promised to help them build new homes and bring water and power into the community.

He said the ministry of lands had also promised that each family would be given land titles with 75 year leases for their designated plots.

But he says three years have gone by and none of these promises have been kept and his community continues to struggle to rebuild some semblance of a life on the land.

"Some of those you see sitting in small houses on the clover, that have managed to put up some timber and some roofing iron it is through their own efforts. Some of us are still living under tents if you go around you will see them they are all torn now. You know they have served us well since 2014 but they are no longer any good."

But there are more pressing issues than housing in April Valley according to their women's leader Brenda Ketea.

"Our biggest problems are access to water and health clinics because it is a new home for us we find it hard. Especially with water. We use wells and it is quite hard work pulling up water and our wells are not that hygienic. We use these wells to do our washing and we even drink and bathe from them as well."

Mrs Ketea says when they first started using the wells some of the children got really sick and because the nearest medical clinic was miles away and part of the journey could only be made on foot some had died on the way to hospital.

Death is still a sensitive topic for this community who lost 21 of its members. Mothers, fathers, brothers and sisters swept away in the floods.

A community youth leader John Maelikiei says many young people in the community still have trouble dealing with the events of the flood.

"For us young people we are a little bit affected because some of us have lost our fathers some young ones no longer have fathers some of the young ones running around are still children and don't have mothers. That is how we are affected we see those children struggling and we worry for them they have lost their help in the community and we look out for them."

Many of the youths at April Valley are not attending school, some dropped out after the floods and never went back others cannot afford to pay for school fees. Some of the young men told me a lot of the youths have very low self-esteem.

"I think if we had something like a joinery or something like that it would be best for us youths here to preoccupy ourselves with and make things and get some sort of an income. And some courses that can open these young peoples minds and lift their self-esteem so they can go out and do something."

Up on a hill looking over the valley the community have constructed a church from bits and pieces of timber and plywood and a whole lot of other material I didn't recognise.

In front of the church there is a large headstone and next to it a flagpole with a tattered Solomon Islands flag fluttering defiantly in the wind.

Michael Fa'abona said they constructed the monument in memory of their loved ones.

I later approached the minister of lands Moses Garu during a break in Parliament and asked him about Mr Faabona's claims.

Although he wouldn't go on tape the minister said as far as he was aware the ministry was still working on getting water and power to the victims.

But he said other issues related to land tenure were more complex and had encountered some issues because opportunists who were not victims of the floods had also been moving in on the allocated lands.

He told me to get in touch with his permanent secretary who he said would be more across the issue.

I am still trying to get in touch with the man but I am not too sure anything he tells me is going to make life any easier for Michael and Brenda and the children of April Valley who for the past three years have been trying to carve out a life for themselves while dealing with the terrible loss of so many in their community.

"I just want to say to all the countries outside of Solomon Islands, I have heard since we went through this tragedy that they have really helped us in responding to the Solomon Islands government's appeal for assistance in the media for any country with the heart to help. I want to say thank you so much for all the help from donors and people that was given to Solomon Islands. It is just for that help to reach us from the government that we have been waiting for up until now."

I left the April Valley community with mixed feelings, elated at actually having found them and got their side of the story but also saddened that their reality would continue long after my footsteps were washed away from that swampy path in the hills above Honiara.