Andrew MacKenzie is on a mission to develop young rowers and rowing coaches in Vanuatu.

The Professor of Landscape Architecture has coached at state and national level in Australia for 15 years, and led a team to the World Championships in 2005.

He was recently appointed Director of Rowing for the Vanuatu Rowing Association and told Vinnie Wylie about his plans to build a program that is both successful and sustainable. 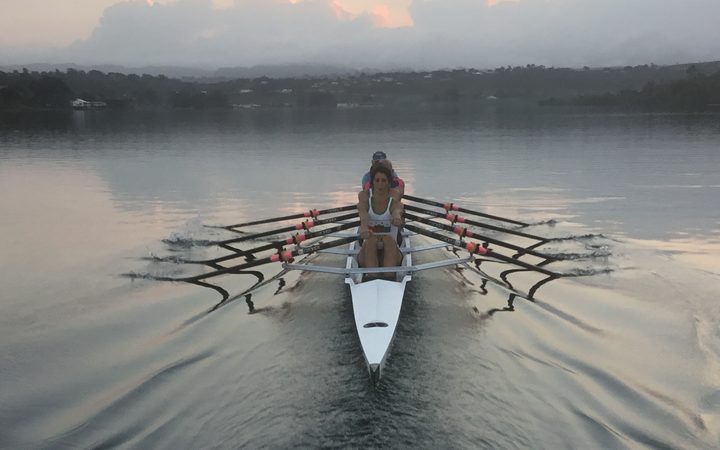 ANDREW MACKENZIE: My main goal here is to set up a system of talent identification, coach training programmes and training equipment. They're well serviced with on water equipment, so boats and thing, but they've still got a long way to go in terms of off water, like weights training and cross training. (Another focus is) To also give the rowers some sort of measurable, achievable goals. It's really difficult here, you can imagine, where they don't actually get to compete unless rowers come to the country or they go to another country and so most of their time they're spending training is really about them trying to set some goals for them in terms of doing local time trials: personal goals in boat speed, and getting them excited about the idea that they can essentially measure their speed as well as in a boat compared to other countries just by doing time trials and doing competitive activities in the lagoon here.

The second thing I think is really important here is that there is a lot of goodwill and a lot of energy and enthusiasm but transferring say my knowledge or anybody's knowledge that comes to the country into the new cohort or population, so that you're not constantly relying on individuals like me to kind of appear out of the blue and riding that wave while we're here. It's just trying to get something that's a bit more sustainable, it's really important.

VINNIE WYLIE: What are your initial impressions of the some of the young rowers that you have on hand and the talent at your disposal?

AM: Technically they're pretty good. They're actually quite solid, they've had a good base. Luigi (Teilemb, who competed at the 2016 Rio Olympics) isn't the only one that's got that talent, there's a lot of natural rowers here. These rowers are all pretty young, they've grown up in an environment where they spent a lot of time running around as kids so they're all naturally pretty fit and strong and pretty resilient. I'd like to think that they're not quite as high maintenance as some of the kids you get over in the developed countries. I guess the big challenge here is that I don't really understand the culture of competition or competitiveness as we might in Australia, so really trying to get them to set their own goals and speak to them has actually probably been the biggest challenge. It's no good me coming in and saying "well this is how we used to do it in Australia" or New Zealand's very similar, so then to actually go the other way and say "you need to train this much if you want to compete at this level", you need to really sort of understand where they're coming from. The other one of course for these guys is just simple things like nutrition, getting access to the shed. I mean we train early in the morning and they've got to be able to get down there. They don't have mums and dad with cars who can drop them off, they often have to walk or ride a bike or catch public transport, so they're the kind of challenges and we've just got to work around those.