Thanks given for RAMSI in the Solomons

The regional security force that has been keeping the peace in the Solomon Islands for the better part of 14 years is leaving the country this Friday.

The Regional Assistance Mission, or RAMSI as it's known, intervened in Solomon Islands after bloody ethnic fighting killed hundreds,displaced tens of thousands and brought the nation's economy to its knees.

Our reporter Koroi Hawkins is in Solomon Islands and attended the thanksgiving service that has started a week of farewells to RAMSI. 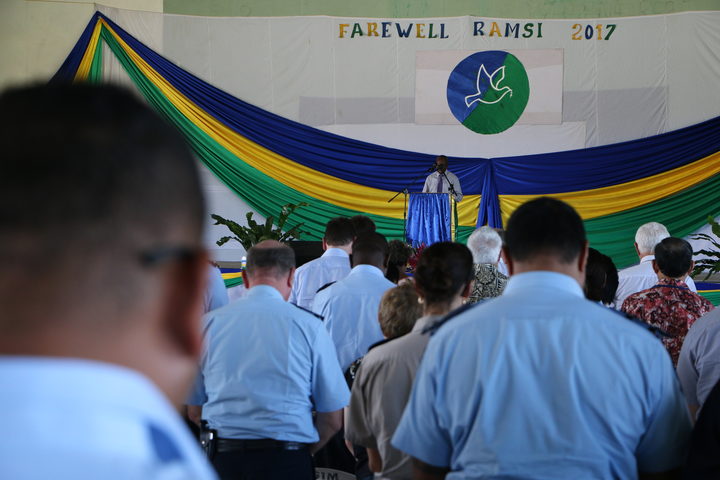 Hundreds of Solomon Islanders gathered at the Maranatha Hall east of Honiara for the service to give thanks for RAMSI.

"We prey that every Solomon Islander takes full responsibility in ensuring that we all live together in long lasting peace and prosperity from here on." Reverend Mareta Tahu.

This wasn't your usual church service though.

There were speeches - the first from the special coordinator for RAMSI,Quinton Devlin.

He acknowledged the work of thousands of men and women from New Zealand, Australia and 13 Pacific island countries who contributed to the mission.

"To help a friend in need, to end the violence, to stabilise the country and its economy, to help national and provincial governments better represent and serve their citizens and to create the conditions where Solomon Islanders could resume control of their lives and their futures."

The Solomon Islands prime minister Manasseh Sogavare also spoke giving thanks for all the partnership had achieved.

On the streets of Honiara, some Solomon Islanders voiced their worries about RAMSI leaving.

"I feel I am not safe, I'm not confident when RAMSI is away ... Makes me feel really sad because RAMSI has benig doing a lot of work here in the Solomons and has established a lot of things, peace and order. And people were starting to gain confidence when RAMSI was here ... We are not really sure what will come after they are leaving Solomon Islands. As we are the women of Solomon Islands because already in the past during this ethnic tension it hurt us and put us in some kind of position that we lost we nothing."

The government has been at pains to point out that there will still be Australian and New Zealand police officers in the Solomon Islands - as long term advisors.

And much of the work to improve the government will continue under longer term bilateral programs.

As one of the locally based diplomats put it in the loca paper 'RAMSI is leaving but we are not.'

At the RAMSI thanksgiving service the Archbishop of the Church of Melanesia Reverend George Takeli laid down a challenge to all Solomon Islanders.

"What are we looking for and where do we go from here as we celebrate this service. Do we have a goal? Do we have an aim? As the saying goes, if we aim at nothing we will hit nothing."

Leaders from all 15 Pacific countries that contributed to the mission will be travelling to Honiara this week for the final RAMSI farewell event on Thursday which has been declared a public holiday.

From Honiara, this is Koroa Hawkins.