A point of difference in the candidate field in a rural Papua New Guinea district is breeding some hope for change on the eve of the national election.

PNG begins polling next week after a typically exuberant campaign period which wraps up this Friday.

As Johnny Blades reports, in the rural village belt of Central province's Rigo Open, the thirst for change is mixed with wariness about whether PNG can break a long-running cycle. 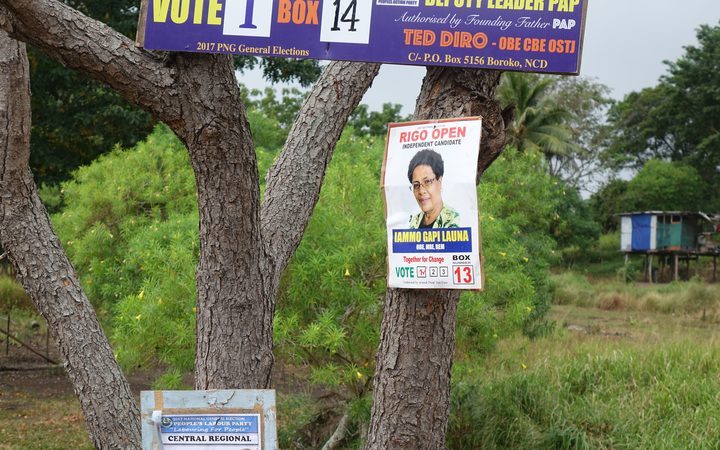 In some ways, the candidate field in Rigo Open is very typical for an electorate in PNG's 2017 election.

There are a lot of candidates, 39, and many of them, 22, are running as independents.

And as with candidates all over PNG, they're campaigning about how they seek to address failing basic services.

Which is exactly what is being sought each PNG election by voters like Brian in Rigo's Saroa village.

"We have... Water problems in our village. We have a health centre but we don't have medicine, we don't have a doctor in here. Then there was the lack of jobs, and dilapidated roads and bridges.The school we have here was built by the Australian government in the 1950s.It's the oldest school built by the Australian administration, and it's still the same until today," he said.

Local people like Harai Naboru will tell you has been the same in almost every election since PNG gained independence in 1975.

"I haven't seen any changes. It's all the same. You cannot see any changes," she said.

"Maybe in the city (Port Moresby, an hour's drive to the west) you see a new highway being built... There's no highway up here."

In this, the friendly villages of the valleys and flats of Rigo are typical of rural PNG.

But in another sense Rigo is quite different

It has the most woman contesting a single electorate in the whole diverse country of almost 8 million people.

Rigo Open's field has seven women among a total of 39 candidates.

At around 20 percent of the field, that's far higher than the 5 percent of women in the total number of candidates in the national election 3340.

A former local teacher, Lyn Mairi says PNG needs a better balance of gender in the parliament, and that this would encourage more women to step into leadership roles.

"I think that if you also have a female in Central (province), I know that there will be some improvement coming up with these females, because most females are not comfortable going up to see their own parliament leaders on their own," she said.

Out here in the rolling hills of Rigo Open, it's not as if women are not already doing the real work at the grassroots level.

"We have to go looking for water, women have to carry the water as far as that end (or) that end, or they load up on vehicles to go collect water," said Harai Naboru.

But the hopes for a new female leadership are dampened by a general wariness about the chances of a fair and secure election.

"There's concern about the ballot boxes, and about ballot papers being printed overseas," he explained, citing growing concerns about surplus ballot papers apparently in circulation outside the Electoral Commission's hands."

"Not too sure how that translates being that the population's meant to increase, not decrease," said Mr Gavarananu.

"There's not much visibility in the security forces here," he added.

That said, the police were manning a checkpoint at Kwikila and were approachable.

Chatting, they could only sigh about the fact that they were long overdue allowances for basic needs like food and fuel.

It's a common story around PNG.

Mr Pala is the Justice Minister and from the ruling people's National Congress Party of Prime minister Peter O'Neill,

The lack of voter awareness is also an obstacle, she says, citing the need to vote for reasons other than short term material gain during the frenzy of the campaign season.

Yet Ms Leka says even if she doesn;t win Rigo Open, the many discussions she's had with constituents, can help the electorate.

She says people desperately want change, because the fundamentals of a functioning society are not there.

"And then there's parents trying to bring their sick child down to hospital in Kwikila town, which is our headquarters. On the way, the child dies," said Ms Leka.

"These are real stories, and you imagine what else goes on, just to seek the basic attention, because it's dysfunctional at the community level and at the village level."

Across PNG, it's expected that of those independents who win election after the coming polls many will be absorbed quickly into the biggest parties in the rush to form the next coalition government.

It's up to them to make the most of their time in parliament - for the needs of their people, like the villagers in Rigo, or themselves.

The turnover rate of MPs in PNG elections is traditionally high, suggesting the performance so far has been dire.