A chance discovery by two men spending a day fishing on a New Caledonia reef has led to a new species of fish being named after them.

In July 2014, Pierre and William Larue went boating at Tombo Reef, just outside Noumea, when they happened upon a small silver fish, about 5cm long, with googly eyes that spread across much of its body.

It looked out of place, so the pair took pictures and collected the fish, and eventually arrived at the Pacific Community's marine lab in Noumea, where it was studied by Elodie Vourey.

A senior fisheries scientist at the lab, Valerie Allain, told Jamie Tahana the fish has now been confirmed as a new species: Polyipnus Laruei. 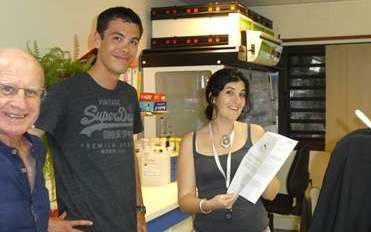 VALERIE ALLAIN: It's actually a deep sea fish that people never have the opportunity to see and so it's kind of grey/silvery with a big eye and photophores, and it's absolutely so different from coral or lagoon fish that it really attracted their attention.

JAMIE TAHANA: So how did a deep sea fish find its way to Tombo Reef?

VA: So that's one of the mysteries of this story, and when we talked to those two persons what they told us was that they actually stopped in the area because they saw some marine mammals playing at the surface and so they were looking at those animals when they studied the small fish and so one of the hypotheses we have to explain this fish arriving at the surface is that maybe the marine mammals were hunting in the deep waters and when they came back up to the marine surface maybe the fish was brought back up with them to the surface. The small fish was dead at the surface.

JT: The remarkable thing is that it's a chance discovery, they just stumbled across it. It was an expedition to find a new species was it?

VA: No it was actually, you know, two people just going for a day fishing. It was pure chance and they were actually, yeah...because the fish is about five centimeters long, so it's very small, and the chance of finding it and finding it in the perfect condition, because after a few hours at the surface it will probably have been eaten by a bird or by any other fish, so it was a lot of chance happening there.

JT: And it eventually finds its way to your lab. What did you do with it to confirm the whole discovery?

VA: So we have our taxonomist, Elodie Vourey, she specialises in identification of deep sea fish and crustaceans and all that, and so we immediately looked into the literature looking at the different species existing in this family and a number of characteristics; the pattern on the fish, the position of the photophores and the number of rays didn't match any of the described fish in the literature. So she made a very in-depth description and she contacted the world specialist of this fish family in the US, and he confirmed that, yeah, it's a fish that has never been described before, so this is how we ended up knowing that this is a new species to science. And so in the process, because it's a new species, you have to name this new species, and as kind of an ackowledgement we thought to name this new fish with their family name: Polyipnus Laruei.

JT: And have you managed to find other specimens of this fish in the past couple of years?

VA: Yeah so because this discovery was in 2014, since then we've made two cruises and we tried to go in the same area and we tried to trawl at the depth where we think this fish can live, and we think it's living deeper than a 400 metre depth. We caught some other specimens of the same family, but not the same species. So we're kind of a little bit frustrated, but this is the way it is. We'll keep searching.