Vanuatu's president Baldwin Lonsdale has been farewelled at a state funeral and procession in the capital Port Vila.

He died suddenly at the weekend after a suspected heart attack.

Our correspondent in Port Vila, Len Garae, spoke to Sally Round from the capital's airport before the arrival of the funeral cortege.

From there Father Lonsdale's body was transported to Torba province for burial. 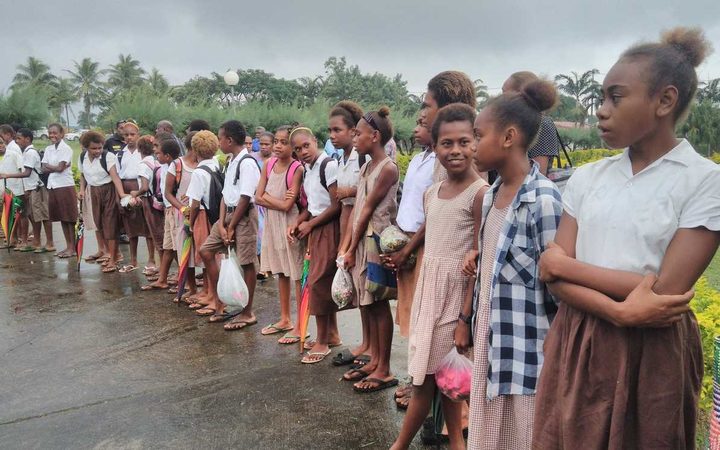 Children are lining the route from the Vanuatu parliament to the airport as the funeral procession takes the President Baldwin Lonsdale back to his home. Photo: Vanuatu Daily Post

LEN GARAE: It is raining in Port Vila and it is also raining in the heart of the population of Port Vila because of the loss of the President of the Republic. I mean just as we speak there are people arriving at the airport dressed all in black while all along the streets of Port Vila, all the secondary school students, hundreds, even thousands are lining the streets in preparation to farewell his body as he is travelling to the airport in preparation for the flight back to his island in the northern province of Torba.

SALLY ROUND: And the president's body has been lying in state for the last couple of days. Have there been many people who've been paying their last respects?

LG: Virtually everybody in Port Vila. The population in Port Vila is over 80-thousand and  there have been people every day, every hour and they have to be controlled to ensure the place is not overcrowded.

SR: The president's body is being taken to his home island first of all for a kastom ceremony is that correct?

LG: That is correct. The government has chartered a plane to fly him to his home island of Motolava but before that there's going to be a farewell gun salute at the airport to farewell the body and this is a traditional practice that is given to all state ministers, persons of state that lost their lives while on duty and the late president was the first president of the Republic to have died while on duty.

SR: Then his body moves to Vanualava for burial.

LG: Yes his body will be buried at the family plot in his home island and in fact as we speak we have already received reports that the biggest secondary school in Torba province called Arep Secondary School, the name has been changed to Lonsdale Memorial Secondary School in Torba province in his honour and definitely he will be buried next to the grave of his late wife.