The United Nations says it is facilitating talks in Solomon Islands partly to build confidence among the people as the Regional Assistance Mission prepares to leave.

The Australian led RAMSI mission departs the Solomons next week after providing protection and development assistance since 2003, following years of violent tension on Guadalcanal.

The talks, focussing on the sustainability of peace and the maintenance of security, are being hosted by Prime Minister Manasseh Sogavare, but they are aimed at a wide cross section of Solomons' society.

The UN Development Programme's Pacific Resident Coordinator, Osnat Lubrani, told Don Wiseman they want to facilitate discussion around some of the difficult issues that the people in the Solomons don't have an opportunity to do, often enough. 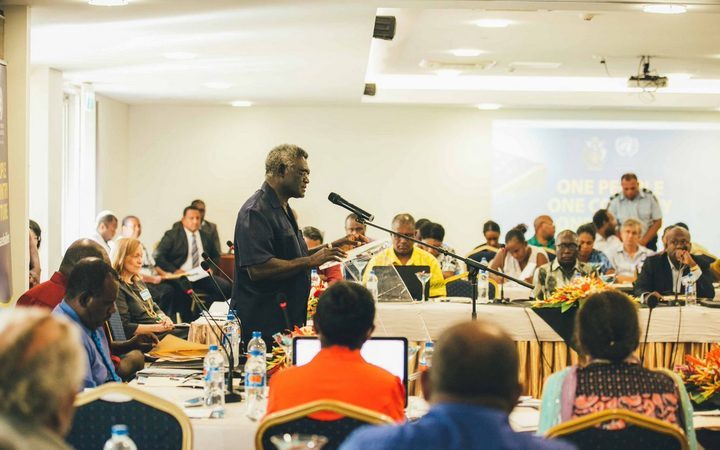 The UN says it is facilitating talks in Solomon Islands partly to build confidence among the people as the Regional Assistance Mission prepares to leave. Photo: Solomon Islands UNDP

OSNAT LUBRANI: I think what we're trying to do is facilitate discussions around some of the difficult issues that sometimes people in the Solomon Islands don't have a chance to do often enough. Both at the provincial level, to get different stakeholders to share and discuss what their views are about development issues, about security issues. Those discussions should not just involve politicians, the discussions should involve young people, so I think that's a healthy thing and timed with the withdrawal of RAMSI it's also important to give those sorts of discussions momentum to build confidence in the country.

OL: Yes, my hope is that these discussions will not just lead to more talk. And I think there is a sense here, you know, we have the premiers from all of the provinces here speaking very strongly and very passionately about action that needs to take place. And about changes in governance and about addressing corruption and working on more efficient and effective decentralisation that looks at what people's priorities are in the rural areas. So you can say, let's not talk and let's wait for action but I do think that for us in the UN to support that kind of more inclusive dialogue that gets stakeholders together we are hopeful that it can lead to action.

DW: RAMSI goes next week, is the fact that there is seen as a need to have this sort of discussion now, is this an indication that people remain still very concerned about peace and security and whether or not it will last?

OL: Well I think that there are people who have those sort of concerns and again those sorts of discussions are a good way to speak about what is being done, what still needs to be done and how the ownership of whatever needs to be done lies not just with the government but with the people of the Solomon Islands. How do you work on disputes, whether it's at the community level or between provinces? And then how do you move forward? So I don't get a sense that there is grave concern and I think there has been a lot of discussion and preparation and capacities are in place and mechanisms are in place to maintain security and peace, but the processes that still need to happen in terms of changes and strengthening governance needs to be looked at over the medium and I would say the long-term. So support from the international community and friends of Solomon Islands is needed for a while to go. Not in the form of security and assistance missions but certainly in terms of lots of strategies and talks but also to translate those into actions whether it's through laws through better enforcement, whether its revisiting governance mechanisms that don't work as well as they should.

DW: The Prime Minister when he was in New York just recently, he raised with the UN the desire to have an increased involvement from the UN. So is there going to be more UN involvement once RAMSI departs?

OL: Look, the UN involvement is more to share expertise, to share other experiences, to facilitate, to assist in convening. So there is no intention to replace RAMSI but there is quite, I would say, an official commitment from the Solomon Islands Government to a peace and unity agenda. There is a Peace Ministry, there is a Peace Policy but then again to move these two more to the implementation phase, there is also recognition that sometimes capacities are lacking and sometimes funds are lacking. Even if it is in terms of getting that cross-provincial discussion among young people, among women to share experiences to build that national unity. It is not easy given the geography, given the economic situation, the problems with infrastructure and with transport and communications. So I think that's where support from the UN can be useful.