Indonesia's new ambassador to New Zealand says the indigenous population of Papua region is not pushing for independence.

Tantowi Yahya says the push for a referendum is coming from overseas-based elements who do not represent the local populace.

He says the provinces of Papua and West Papua are governed by ethnic Papuans, and that since 2014 Indonesia's government of Joko Widodo has made significant gains in development in this region.

Ambassador Tantowi told Johnny Blades that Indonesia acknowledges the mistakes of the past and has been working hard to take care of Papuans' human rights. 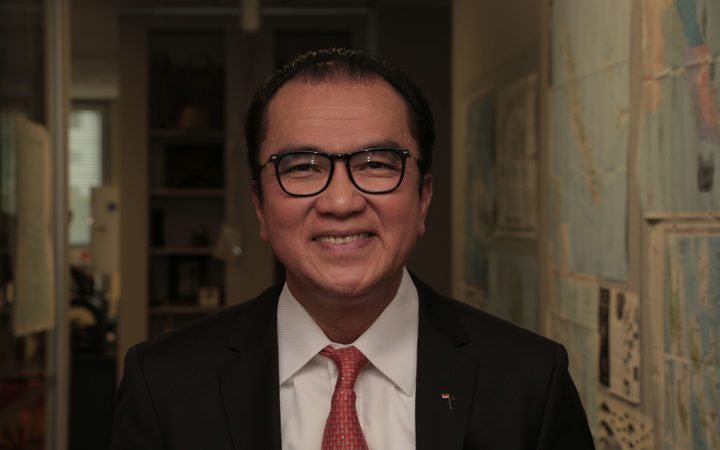 TANTOWI YAHYA: We understand the perceptions that hangs around in connection with Papua. For that reason our police and military have been doing their job very carefully. So they have been informed and very well trained not to do anything that can abuse human rights. They are very careful. But then the news that spreads to the world is the other way around.

JOHNNY BLADES: Alright, well the thing is, the Indonesian human rights body KONTRAS (Commission for the Disappeared and Victims of Violence) last year was saying that it had about 1,200 reports from Papua of people who suffered from harassment, killings, torture and other ill-treatment - suggesting maybe that's just the tip of the iceberg. Many of the abuses are by security forces against Papuans who are just trying to exercise their rights to freedom of expression and assembly. That seems to be the persistent area of abuses.

TY: Well, we have to see this issue very, very clearly. I mean, why it happens. For police and for military men working in Papua, it's not a safe place, it's not really a safe place...

TY: Because the way, I can say that the police and the military men in the army, they have been perceived as the representatives of the government of Jakarta, and many times they become the target. That's why in some areas, they don't feel safe. But then - because I have been there many times too - they are still working under the ethic of not doing anything that can abuse human rights. So like I said earlier, they have been doing their jobs very carefully, very carefully. But then what can you do if they are attacked? They have to defend themselves. In the defence, sometimes there is something bad (that) happens. This is the kind of  thing which is reported to the world as a kind of a torture; torture from the police or the army towards their fellow Papuans. So what happens in fact is the other way around. I can say this because I've been to Papua, to see in front of my very eyes what happens actually.

JB: It's interesting what you're saying, because wouldn't there be a reason why people attack security forces? It doesn't just happen for no reason does it?

TY: Well if you ask me frankly, who wants freedoms? I mean, the people of Papua majority, they love being with Indonesia. They are happy with what we have been doing so far. I mean, the development is clear, is now taking place. And after the reformation back in 1998 and in 2001 we introduced special autonomy to both of the Papua provinces (Papua and West Papua). And the meaning of special autonomy is that it's no longer the people outside Papua who govern the two provinces. Since the special autonomy applied, the two provinces of Papua are governed by ethnic Papuans, okay; 40 regencies and cities are all governed by ethnic Papuans, okay; and also the members of the parliament. It didn't happen in the past. I mean, if you talk about freedom, they get their freedom now, so to speak.

JB: Governor (Lukas) Enembe, the governor of Papua province, obviously he's an ethnic Papuan. One of the things he's really worried about is transmigration, and it's something that we hear concerns about from a lot of Papuans. You know, I understand the formal process of transmigration isn't necessarily in place but there is still a huge influx of people from other parts of the republic and it's changing the fabric of Papuan society, isn't it. And they worry that they're being marginalised, so I guess my question is why does the government allow that to happen?

TY: We cannot stop the Indonesians who live outside of Papua from moving into Papua, because Papua is an integral part of Indonesia. I mean, the Indonesians are free to live and work anywhere they want, and because Papua is part of Indonesia, they can go there. So there is no way government can stop people from moving in. But you know what happens today, it's the other way around. It's the people from outside Papua who are marginalised, they cannot become leaders of the regencies up to the province, there is no way they can do that. And also, some of the jobs are provided for the ethnic Papuans. One of the few occupations and jobs that the people outside Papua can do are purely on business level, so they become merchants, they become traders.

JB: But the migrants seem to dominate business in Papua, don't they?

TY: Well, business is something new for Papua people, so they need to learn. This is a kind of transfer of knowledge from the migrants to the ethnic Papuans. They need to learn that from the migrants. And I think sooner rather than later most of the ethnic Papuan people will become businessmen too. So this is the beauty of inviting  migrants to live, to work, because at the same time they transfer their knowledge and skill to the local people.

JB: But it is an area of concern for them. So too is of course the self-determination issue. Would you agree that the process by which Papua was incorporated into Indonesia remains a sore point for Papuans? It's behind their calls for a referendum essentially, isn't it?

TY: Well, this is the kind of notion which was forced by those who want freedom for Papua. But the people themselves, the majority of people living in those two provinces, again I'm telling you, they're happy with Indonesia. So the issue does no longer exist, except by those who have an agenda for... Free Papua Movement as such. we don't see any issue any more in regards to the Pepera, or Act of Free Choice. Everything was done properly, everything was done and conducted under the supervisions. Nothing was unclear when the Act of Free Choice (1969) was exercised. And why it was done in such a way, not one man one vote, (is) because those days it was not possible to make each and every one to use his or her constitutional voice to get the vote. And the system, I think, due to the terrains and due to the geographical location is also taking place in other parts of the world. The result of the Pepera was then brought to the UN General Assembly and it was approved. During the General Assembly  of the United Nations, none of the members of the United Nations said no to the process that was happening in the Pepera.

JB: If there was enough of a groundswell for a referendum, isn't that democracy, to give people a voice about how they want their political status to be?

TY: Johnny, why should we talk about referendum? If you know the result of the last presidential elections, over sixty percent of the Papuan people voted for Jokowi (Indonesian president Joko Widodo). It means that he wants Jokowi to become the president and preside for the people of Papua. If you talk about a referendum, you're talking about yourselves. If it comes from your people, then probably it can be accepted by the government. But here the voice of referendum is not coming from the Papuans. They are Papuans who live abroad and they are no longer Indonesians.