Floating island off Tahiti aims to be eco-friendly

A French Polynesian environmentalist helping proponents of a floating island in the territory says it's likely to mean little harm to the environment.

Pauline Sillinger is helping with community outreach for the experiment which involves designing and building a floating sustainable community off Tahiti.

French Polynesia is working with the US-based Seasteading Institute on a pilot "floating island" which would be self-contained with its own governing framework.

Ms Sillinger told Sally Round she was sceptical at first but she's learnt first hand that the project's an environmental one. 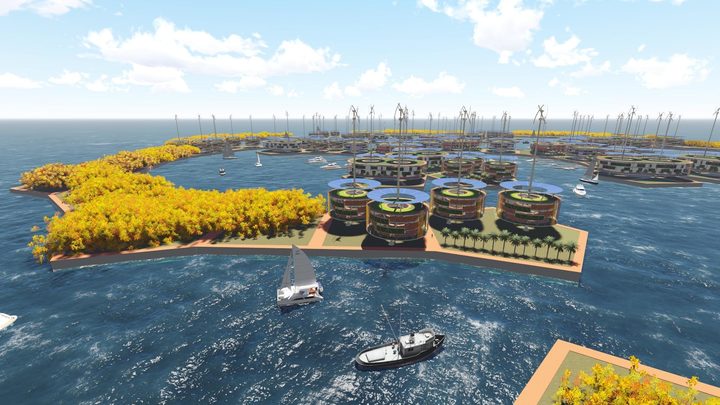 PAULINE SILLINGER: i know from the environmental impact assessment that they have ordered that the impacts should be fairly low. I also know that the team is pro eco-friendly and for me this is the most reassuring thing, you know, the fact that you have a team of people who not only  want to impress the society with good deeds,  I would regard, to the environment, they also want to do the best for the environment because they truly believe  it is a cause that is worth supporting

SALLY ROUND: So what are the environmental challenges that you can see that need to be taken into account?

PS: There are many. If we only talk about the biophysical environment let's say ... the platform is going to be over the water. We have a lot of luxury tourism in French Polynesia and we have  a lot of over water bungalows . I know that there are some environmental impacts from those over water bungalows,  for example, because they impact the amount of sunlight that penetrates  the micro column and then all the micro organisms are affected in terms of photosynthesis but from what I have heard from the environmental impact assessment of the floating island project it seems that it should not be that much of an issue because they've actually found a way to have little platforms that are going to let the sunlight penetrate so this is one challenge, you know, maybe the impact on the coral environment , the impact on the marine animals and stuff like this  but they are really being taken into account. Floating structures are so much better than reclamation so if we compare it's better for the marine environment  and even without the comparison I think the environmental impacts on the marine animals and all the micro organisms  in the water, on the water currents , on the water temperature and things like this  are going to be very small.

SR: And they talk about it being sustainable so I guess any waste to be dealt with on the floating island. Is that possible?

PS: Of course it's possible. I'm very interested in how eco-villages work. What really caught my attention in this project in the beginning  is that for me it was like creating a high tech eco-village. You know an eco-village really tries to close the loop either in terms of environment, or in terms of our economic system and they do not want to depend on the outside. It doesn't mean that they live by themselves and they're completely secluded from the rest of society. It means that they're making the maximum amount of effort in order to have their own energy production in order to deal with their own waste , in order to deal with their grey water, to collect it, to treat it so everything is already being thought of  and really when we say this is an ecological project, it's also showing there are technologies that exist that are better than fossil fuels and that are better than all the technology that we're using right now that are actually environmentally destructive  and we can use them. It's not that much of a challenge.

SR: You say you're involved with doing some outreach work for the Seasteading Institute. What sort of reaction are you getting from the community there in French Polynesia?

PS: Already now I can tell you the reaction from the Polynesian population. What we see on social media is that the population really doesn't agree with the project. They really don't want it. I think there are two main reasons for that. The first is an historical reason. We're a country that has undergone colonialism so hearing about a bunch of Western people coming from Silicon Valley, they might be rich and they might be libertarian, I don't know how you say that in English, it's threatening to us. So we're very sceptical as Polynesians because we are afraid that what we have lived in the past with all those invasions, let's say, that Westerners deemed so good for the Polynesian people, we're afraid that this is going to happen again. The second reason why people are so sceptical about the project and really don't welcome it so far is because there is such a lack of information. If the Polynesian people was more interested in knowing about the details of the project, the political details, the social details, the environmental details, the economic details, you name it, they would realise that all the details they are afraid of have already been thought of and the solution is a better option than they can imagine. So for now we are having a negative reaction from the population which I completely I understand but the Seasteading Institute is really trying  to work towards raising awareness  with regard to this project but the truth is if the Polynesian people  really really do not want the project after really learning about all the components  of it, so after making an informed decision, let's say, then the Seasteading Institute will decide to go somewhere else  because they're not invaders right?