The homeland security advisor for the governor of Guam says he's more worried about the US territory being struck by a typhoon than a missile from North Korea.

Guam is home to a large military base, but the advisor, George Charfauros, told Ben Robinson Drawbridge people there have a better chance of being struck by lightning than a missile. 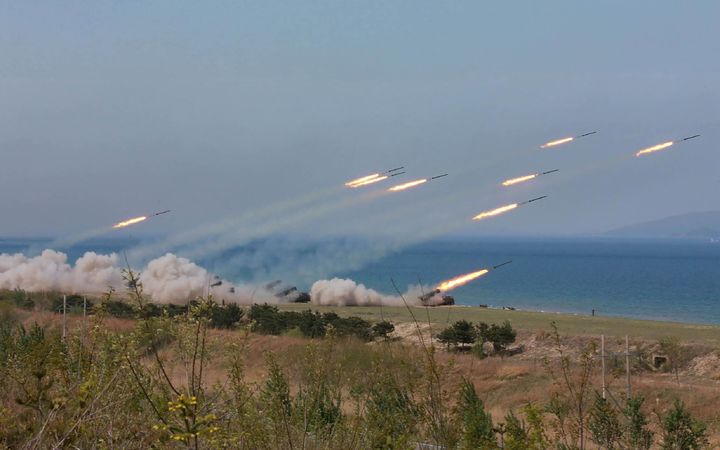 North Korea has been releasing images of live fire exercises in the past few days. Photo: AFP

GEORGE CHARFAUROS: My professional belief is that the US Department of Defense anti-ballistic missile or national missile defence is very very credible and will defend against that threat specifically. So bottom line I am not worried about it.

BEN ROBINSON DRAWBRIDGE: No and I note that the missiles tested the upper range for one of them was only 600 miles.

GC: Guam is further it is about 3500 kilometres away from North Korea it is probably more of a threat to South Korea or Japan but not to Guam.

BRD: It does indicate though that North Korea is trying to increase the range of its missiles and no doubt people on Guam are a little worried.

GC: Yes but I believe that they should not be worried at all I could go on the record that the probability of any of those missiles hitting Guam and getting through the defensive system in place is very low. I would say 0.0001 probability and you are more likely to get hit by lightning than one of those missiles. The defensive system put in place by the US military you can go online and research it you can see it is a layered defence go online and google US National Defense and you get all the information the unclassified version of it. They will show you what exactly is in place how we are going to counter these missiles whether it is against Japan, South Korea, any of our allies or continental United States.

BRD: Still though from your press releases you felt the need to assure people on Guam that they are safe so do you think these tests have created some anxiety within the Guam public?

GC: Not that much I mean I interact with people everyday and people are just going about their lives here enjoying living in a tropical island. There are some that are worried about it but I believe the reason that they are worried is because they are not as aware as I am of the defensive system in place. We are not running around panicking about the whole thing. I am more worried right now about the natural threats to Guam like earthquakes and typhoons than I a missile threat from North Korea. If they ever operationalise a missile that could reach Guam and it got through all the layers, the defensive layers of the US. The plan is just like preparing for a typhoon or an earthquake or any other calamity.

BRD: The time of flight if it were ever launched what would it be?

BRD: And are there bomb shelters for the public.

GC: No we, there is not enough time to go to a bomb shelter so the approach to this is because Guam has been hardened against earthquakes and typhoons I would say 95 percent of our buildings here on Guam are concrete. The same structures that are protecting us from natural disasters are also protecting us from man made disasters.