PIANGO concerns about PACER PLUS remain

Early next month the Pacific Islands Forum's PACER Plus agreement for closer economic relations is being signed after being under consideration, in various forms, since 2001.

Ahead of that the Forum is inviting the regional private sector and civil society groups to peruse the document, at its 7th regional Non-State Actors Dialogue on May 29th.

But for one key civil society group, the Pacific Islands Association of Non Government Organisations or PIANGO, the latest chance to talk is just window dressing.

The head of PIANGO, Emele Duituturaga, spoke with Don Wiseman. 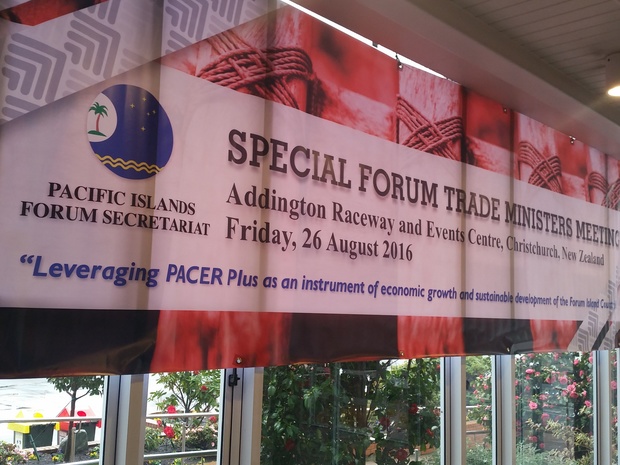 EMELE DUITUTURAGA: I can only speak for PIANGO and our network the Pacific Islands Association of NGOs. We have in the past few years been co-organising with the Pacific Islands Forum Secretariat space for civil society to have input. We have been in the space of talking with government officials trade officials. But last year we decided to step out of it because we got to the point of believing that our inputs or the consultations were not going to make a difference. There was a determination by our governments and Australia and New Zealand that this is going to go ahead. And we have called for an impact assessment with other civil society institutions that has not taken place. So you know getting civil society to look at the text just before it is agreed is kind of like we want civil society to be seen at the table but we are going to go ahead anyway.

DON WISEMAN: So there is a lack of sincerity in what they are doing is that what you are suggesting?

ED: Well for PACER Plus it is no secret that civil society have in the past continued, and still do, to talk about no PACER Plus. And that is our view because we are very very and still are very very concerned about the impacts that this will cause to our private sector and communities. We are have been concerned about the WTO, we are looking at what is going on in the region. So we continue to express those concerns. Now to the extent which those concerns want to be heard I think a way in which the decisions have been taken, governments are going to go ahead. Is reflective that perhaps they would like to see civil society associated but it doesn't really matter what it thinks.

DW: In a statement last week Dame Meg Taylor the secretary general of the [Pacific Islands] Forum said it is critical that the region take an inclusive approach to the finalisation of the PACER Plus text and its implementation going forward. So they sound like they are keen but it is just a tad too late isn't it?

ED: Yes as I have said there are other civil society actors not just PIANGO but under Pacific Process and the Pacific Plus Agreement we don't believe that the full participation, inclusion and equal decision making of civil society has been a signifcant one for this.

DW: What are PIANGO's concerns about PACER Plus?

ED: Well you know when we started this decision for or five years ago our question was what is the plus in PACER and we were led to believe it was the development plus the trade. And so of course being development specialists development actors we felt we had a very important role to play. We consider labour mobility a cry key issue for the Pacific, families are impacted, incomes are impacted movements of people impacts on families they are important issues you know when you are asking the question who is the private sector in the Pacific? You know 80 percent of the Pacific population are still outer island or rural based. You know apart from the big multi-nationals, the big Australian, New Zealand companies our Pacific Island civil society is still small and vulnerable. So we kind of see civil society as in a continuum there could be civil servants ...(inaudible)...So we continue to express concerns that the communities are expressing and so the impacts in terms of the trade agreement are huge as far as we can see. Capacity is another issue a lot of our private sector partners are concerned, they are the ones that are going to be impacted the most there are still concerns about entry barriers and all of that so again we felt that it was very important that national actors both civil society and business become involved. So as a regional actor we felt that was important. The extent to which they have been involved in the conversation we are not that confident that that has been done comprehensively so these are our concerns.