Mr Wenda is in New Zealand this week, raising awareness about the Indonesian-administered region of Papua, or West Papua, which he fled in 2003.

Last night in Wellington he addressed a group of MPs, after which eleven members signed a declaration by the International Parliamentarians for West Papua.

This international organisation of MPs is calling for an internationally supervised self-determination vote in West Papua.

Mr Wenda spoke to Johnny Blades and began by talking about a core issue of mistrust between Papuans and the Indonesian state. 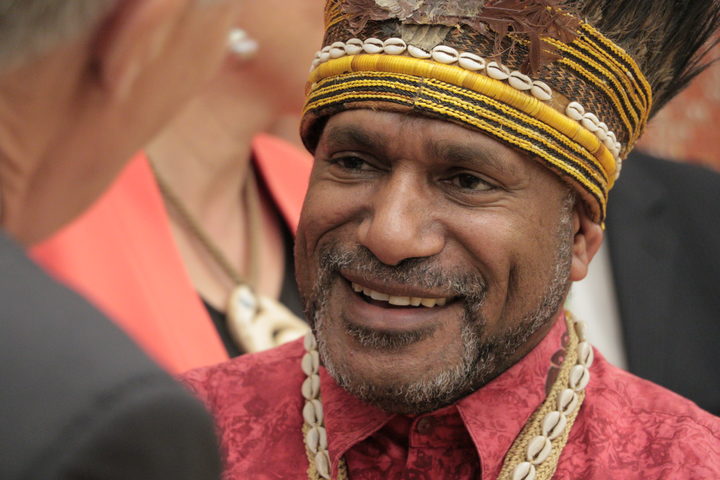 BENNY WENDA: Distrust between Papuan and Indonesian... Jakarta always suspicious of every West papuan, whoever works in the government or ordinary people. So they're suspicious and they're always worried because Indonesia knows that their presence in West Papua is illegal. So they always worry. People who are working in Indonesia, in Jayapura or West Papua, they are always suspicious on them. So there is zero trust between Jakarta and Papuans, very much.

JOHNNY BLADES: This government under President Jokowi seems to have made more of an effort to listen to Papuans or to try and improve conditions on the ground, compared to previous Indonesian governments, would you agree with that?

JB: There's a lot happening in Jakarta at the moment, isn't there? The (outgoing) governor of Jakarta has been sentenced for blasphemy, and there are these radical elements who are sort of whipping up dissatisfaction with the Jokowi government. Tito Karnavian has warned that if that movement isn't stopped, then there'll be unrest in places like Papua. Would you agree with that?

BW: There's a few elements that are trying to gain power, and there's a politics angle in that, in what's happening in Jakarta, because the military want to control. The current government is a civillian government, and so I think they want to go back where it was. So that's why there's a few elements like Wiranto and Prabowo trying to gain power and using these fundamentalists to manipulate them. That's what's happening in Indonesia. It's something will change and unrest will happen.

JB: Do you ever hear from Indonesian government people trying to send you messages or anything?

BW: Until today they never say anything.

JB: But they are well aware of the work you're doing. You are travelling around the world and lobbying, and things are starting to move a bit.

BW: Yeah, they're working very hard trying to stop me, where ever I go. But this fight is not about who gains power, but this is about a humanitarian issue and this is human rights issue. That's why I strongly believe that our right to self-determination still exists. This is something that I believe in. So Indonesia cannot stop me. My people and myself decide to free, so they cannot stop us. That's why I'm confident.

JB: The Pacific Coalition on West Papua, which includes seven countries and of course a big civil society and church network, and the West Papuan Liberation Movement, has really internationalised the issue lately, including at the African, Caribbean and Pacific group summit this month.

BW: Yeah this is a big shift in the Pacific because Solomon Islands and Vanuatu are backing this issue, and we have formed the Pacific Coalition on West Papua, chaired by Solomon Islands prime minister Manasseh Sogavare. So the Manasseh Sogavare leadership is bringing a big impact on the West Papua issue. And the seven countries (of the coalition) I joined. It brings the West Papua case in United Nations level. So this is a big thing to change now. So we also got support from African, Caribbean and the Pacific. So this is a growing number and solidarity around the world.

JB: There's a goal, isn't there, to push Indonesia to have a legitimate self-determination process for the Papuans. Is that the ultimate goal?

BW: Yes that is the the ultimate goal. In fact today we signed the declaration. It's part of the support for an internationally-supervised vote. And that Pacific Coalition and all that are part of the world, we are pushing that direction.

JB: Just now we've seen some New Zealand MPs sign up to it. MPs from other regions in the world have signed up to it. But can it make a difference when it comes to Jakarta?

JB: There's so many tribes in West Papua, could it function well as a nation on its own?

BW: Yeah I think we've been through many experiences in the last 50 years. We've learnt a lot, and we are travelling a lot. So Indonesia might say it's a failed state. But we've are ready to take back our country because this is a last fight against colonialism, and we know that our neighbouring country in the Pacific they already got independence. And we also  learn from them. We're working together to rebuild a new country democratically.