The arrival of a New Zealand Navy vessel in Fiji is being hailed as as a boost in the fight against illegal fishing across right across the South Pacific.

It's the first time one of the New Zealand Navy's inshore patrol vessels has been deployed to the South Pacific.

CEO of The Fiji Fish Marketing Group Darryl Hodson told Tim Glasgow, that in his opinion it is the best thing to happen to the Fiji fishing industry. 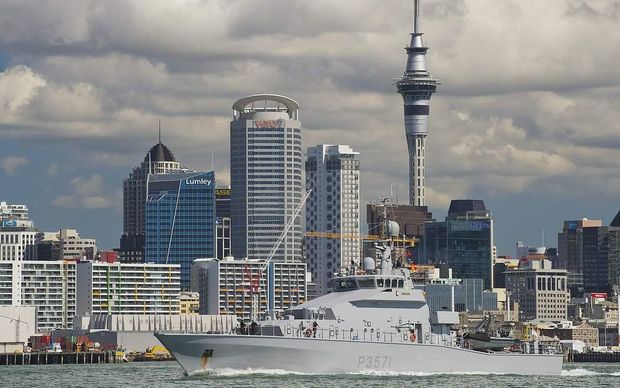 HMNZS Hawea sailing out from the Devonport Naval Base in Auckland Photo: PHOTO NZ

DARYL HODSON: What we've been told and what we've seen in the media here is basically they're around to assist the Fiji Navy in controlling illegal IEU fishing vessels in Fiji waters and I guess not just in Fiji, this one is based in Fiji from what we've been told there's a number of vessels fishing the high seas and fishing the Fiji boundaries. I guess you've heard about the Blue Boats?

DH: They've been coming down as far south as Noumea and that's a long way for them to travel for such small boats but they've picked a lot of them up in the Solomons lately and from our point of view, from Fiji fisheries point of view, a locally owned company, we have 8 boats and we fish inside the EZ and inside and outside of limits we can sort of fish anywhere. and you know the fish stocks are so low  and fishing itself has been so hard even for the contract fishing vessels that we have, that are frozen vessels  that are fishing, not in Fiji waters but in the Southwest Pacific. It's quite shocking the amount of vessels that are fishing around on boarders and the areas that they're not supposed to be fishing. Places like Fiji just can't afford to fund and track these vessels down and get them out of the area.

TG: How bad is the issue in Fijian waters and how much of an impact is it having on the industry?

DH: It is pretty bad. There hasn't been too many caught in our waters because, unfortunately the Fijian Navy has out two of its boats on the reef in the last two months. The third boat, which has gone back to Australia for a rebuild. They just haven't managed their resources very well or trained their people properly to use their vessels I guess. But my understanding is that New Zealand is here to help with some training and get these guys up to speed also and not just cruise around and pick up illegal boats, but also help with some of the fallen down sides of the issues with the Fiji Navy. So i think overall it's a great thing.

There's so many Chinese boats fishing on out boundaries right now on the high sea boundaries it’s ridiculous and their gear is floating through and floating into Fiji waters. About 12-14 years ago Fiji used to harvest 15,000 tonnes of fish per annum. Going back five years ago they reduced that down to 13,000 metric tonnes. When you look at it on a scale basis every vessel needs to catch 250 tonnes of fish per vessel to actually breakeven - there's no profit in that. That's an average sized vessel fishing in Fiji. Now, they haven't harvested any more than 6000 tonnes in the last two years. Quite honestly our boats, we haven't made any money for many years we do other things to subsidise, to keep fishing and keep locals employed.

TG: How much support has the Fijian navy given the fishing industry and how much protection have you had up until now?

DH: We have had a little bit to be honest, when I say a little bit, they have been out and around. I think it has been a whole training with them as well, they're not really focussing on what they're here for. I think that's part of the problem. I think now the Kiwis are making a bit of a stand and actually coming out to try and help in this area obviously it will be a spinoff to other areas so what happens here in Fiji all those illegal fishing boats will know it's going here. I'm sure you will find they will stop everywhere else in the South Pacific. As a start point -  starting here in Fiji -[it] can only be a good thing for the South Pacific.

TG: So it's sort of a statement?

DH: Absolutely. Personally, I think it's best thing that's ever happened to the Fiji fishing industry. We have had a couple of Orions flying around, I don't know if they're still doing it, but a couple of my captains came back and said they were fishing right up in the top end of Fiji and they had an Orion buzz them twice up there. They were up there taking photos and reporting back on our boats and that was about 12 months ago,

They were taking photos and reporting back on our boats. They are looking at certain times but this will be a great opportunity to catch and get rid of a lot of the illegal guys in the area, that's for sure. Get rid of the guys who are thinking of coming our way too.

TG: It shows a bit of an easing between the countries too.