A prominent West Papua independence activist in exile is visiting New Zealand to raise awareness and seek more support for the plight of his people.

Jakarta however says the abuses are largely historical, claiming it has been taking significant steps to improve conditions and foster economic development in Papua.

Mr Wenda has planned visits to Auckland, Wellington and Christchurch this week.

West Papua Action spokesperson Maire Leadbetter says there were several recent attacks on journalists and they are lobbying for democracy and change. 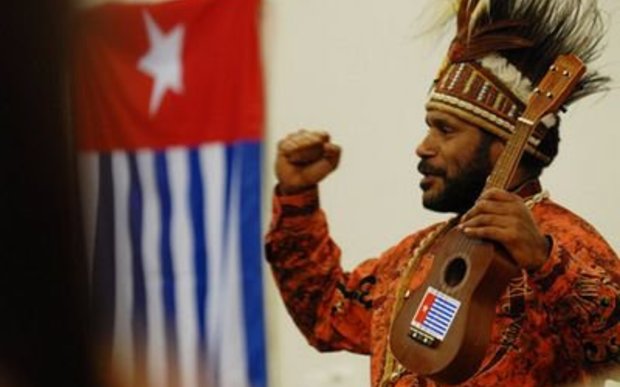 MAIRE LEADBETTER:  There's two sides to this as far as I can see. One is that indigenous journalists in West Papua seem to get a particularly bad time. That's Papuan journalists, so if they cover a demonstration they are likely to end up with an assault or having their cameras ripped off them or whatever. They seem to get a far harder time than Indonesian nationals. And the other side is that international journalists are basically barred from going to West Papua. It is not an official bar as a Radio NZ journalist did manage it back in 2015, as you know. But since that time hardly any international journalists have made it and one or two have sort of got as far as getting across the border only to be fairly summararily deported. So what you have got is no international eyes on the situation, plus those people who are trying to cover things as locals are intimidated, harrassed and sometimes worse things happen to them like beatings. So it is a pretty shocking situation and Gerry Brownlee has a responsibility, as the new foreign minister, to take up this issue with Indonesian authorities. There cannot be any real democracy unless there is a free press and Indonesia's place on the Reporters without Borders list is way down the bottom.

SARA VUI-TALITU:  So what is this visit about?

MAIRE:  We have a West Papua leader in exile, Benny Wenda, who is visiting New Zealand and will be speaking at public meetings in Auckland,   Wellington and Christchurch and will be meeting with parliamentarians and others in Wellington of course, like the Ministry of Foreign Affairs officials who will be meeting with him and making an official report for Foreign Minister Gerry Brownlee, so it is a really opportunity for people to hear first hand from someone who really knows what life is like in West Papua at the moment and people are very welcome.

SARA: I also understand there is a strong lobby of support from Pacific nations for West Papua.

MAIRE : Yes, some Pacific nations have taken the issue up at United Nations level, seven in fact, so there is a call for New Zealand to  join those seven Pacific Island nations led by Solomon Islands and Vanuatu, and if we did we would have eight wouldn't we? And we could grow from there. I think West Papua has been hidden from sight for a lot of New Zealanders and the pressure must go on Indonesia to improve this situation.