With the Rugby League World Cup less than six months away, Pacific Island teams will get an early gauge of their progress in this weekend's international triple-header in Sydney.

Boosted by a number of star recruits, the expectations on Samoa, Fiji and Tonga have never been higher.

Meanwhile Papua New Guinea are looking to maintain momentum from last year and the Cook Islands have a point to prove. 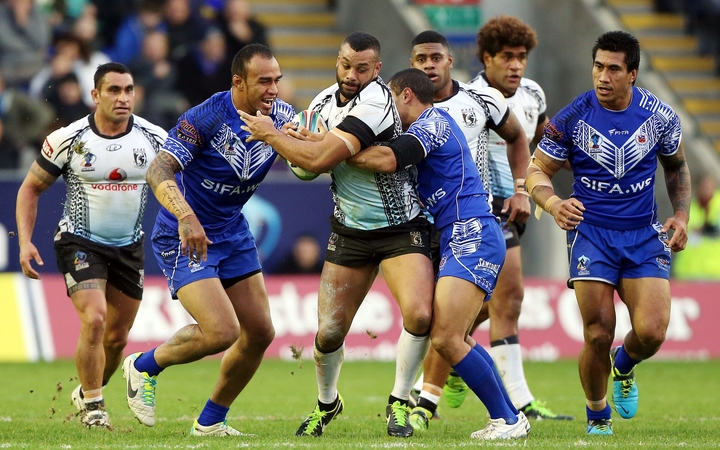 Fiji and Samoa will face Tonga and England in the Pacific Test weekend in May. Photo: PHOTOSPORT

Changes to eligibility rules have allowed Pacific teams to select a number of NRL stars, without jeopardising their chances of switching allegiance before the World Cup.

"If they want to grow the game they've got to allow stars like Anthony Milford and Josh McGuire to play for their second tier countries, if not pick this country first, so it's really good to have them on board. They've worn the jersey before, they know how much passion is involved so they're really looking forward to representing their countries and families."

Melbourne Storm wing Suliasi Vunivalu will make his test debut for Fiji against Tonga after turning down an approach from New Zealand.

The Bati will have to contend with former Kiwis wing Manu Vatuvei, who was a surprise call-up for the Mate Ma'a

Coach Mick Potter says this week has been an important step in Fiji's World Cup preparations.

"'To build that camaraderie and build the friendliness the Fiji Bati team creates it's a unique atmosphere that I've been associated with. It's a great environment and they become very tight and close. And I want that to keep building and for a competitive game I want them to build those combinations on the field as well. There's off the field things that happen will help them on the field and they'll be more committed to each other."

Papua New Guinea are looking to build on last year's upset win against Fiji with a strong showing against Pacific Test debutantes the Cook Islands.

The match will also mark the-long-awaited test debut of Tommy Butterfield, who toured France with the Kumuls back in 2007.

"It's a true honour and a privilege to run out for my country and run out for my family. It's been ten years and I know that I have been on the tour and played tour games and a few other games for PNG and none have counted as tests. So I'm looking forward to it, and I know a lot of people back home are definitely going to be tuning in to this one as well so I'm looking forward to it."

Meanwhile the Cook Islands head coach Tony Iro says they're just excited to be a part of the Pacific Test after four years of being ignored.

Tony Iro says the strength of rugby league is in the southern hemisphere, something which should be on show in these matches.