Dense coral forests are among the surprising discoveries in the ocean depths near the Cook Islands.

Robots have been videoing the seafloor and collecting samples as part of a US mission to better understand the Pacific's unknown deep waters.

Sally Round spent an afternoon exploring with the mission. 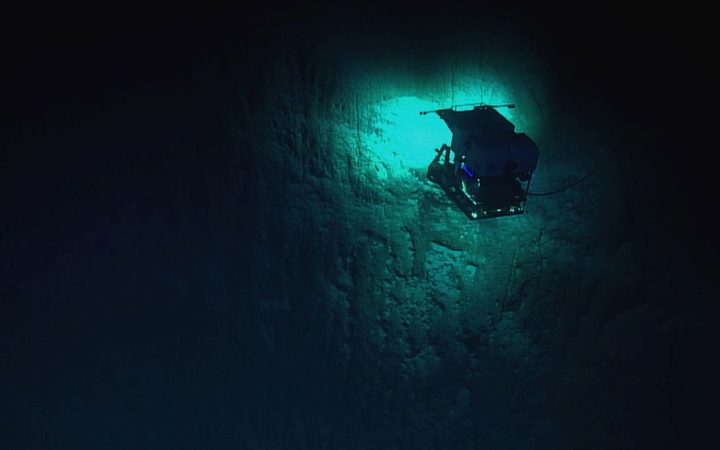 One of the Remote Operated Vehicles (ROV) exploring deep seas of the Pacific Ocean during the NOAA ship Okeanos Explorer's 2017 mission Photo: NOAA Office of Ocean Exploration and Research, Mountains in the Deep: Exploring the Central Pacific Basin.

Dr Del Bohnenstiehl is on the Okeanos Explorer sitting on the high seas 260 kilometres north of the Cook Islands.

"We're just going to try to make a little progress up this slope and really get a sense of how broad this bamboo coral forest is ...."

I'm sitting in Wellington with scientists from the New Zealand scientific agency NIWA and we're "virtually" exploring, via a big screen, with the American team, thousands of kilometres away.

On the ship is the expedition's co-ordinator Kasey Cantwell.

"We have seen quite a few very large corals. There've been a couple as tall as the ROV, a couple as wide as the ROV. They've been absolutely stunning. A couple of dead corals but in this sort of environment, that's pretty typical."

The New Zealand scientists aren't just watching, they're part of the research team, asking for samples which are collected by a robotic claw.

"Getting information like this enables us to put the biodiversity in a much more regional context, to find out what is unique, what's quite common, where boundaries occur, where species can't cross from one area to another."

Dr Clark says the information will be sent to the Cook Islands authorities and will help with sustainability around fishing and seabed mining.

"The sort of information we're collecting with these dives gives us a very good indication of what is down there at the depths they might be interested in but it gives us an idea of what the wider environmental impacts could be of any human disturbance, any mining activity on the deep sea floor."

Dr Clark says the scientists were amazed at the dense coral forests near the Cooks compared to some of the relatively barren areas they'd seen on other dives.