Democracy in the Pacific not one-size-fits-all

In his lecture 'Dark Clouds Over Democracy', Sir Don said democracy was facing big challenges but that it still offered a system everyone could participate in.

He spoke afterwards to Johnny Blades who asked him how he felt about the current state of democracy in the Pacific. 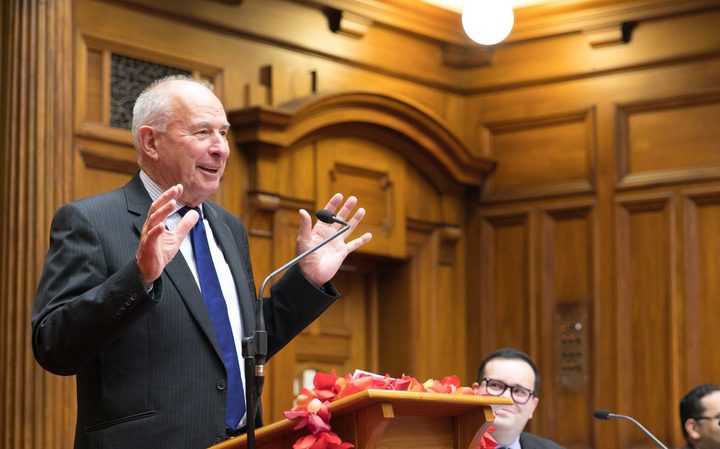 Sir Don McKinnon delivers his lecture 'Dark Clouds Over Democracy' as part of the Commonwealth Parliamentary Association Lecture series, in Wellington, 2 May 2017. Photo: Office of the Clerk of the House of Representatives (NZ)

DON MCKINNON: There are always challenges and you know we are still dealing with societies that have traditionally had leaders by virtue of inheritance, and leaders who have played a very positive role but haven't always adapted to the alternative group of people who want to participate. The main thing is, does everyone participate in the process to create a government, that's the basic.

JOHNNY BLADES: You said in your lecture that mature democracies shouldn't press to hard or shouldn't expect the same kind of levels or standards from some of these other democracies that are very young. In the Pacific do you think that Australia and New Zealand push too hard sometimes?

DM: Sometimes I think they do on issues that may not matter very much. I'm not going to name them because I'll get in bigger trouble. But when you list the number of things that good democracies should have, new democracies just won't get there. You start with an electoral system that serves everyone, where everyone feels they're part of it. That creates a government that people feel they're part of. And that government should have to face the people every three or four years. When you stretch out and do separate rights for people you've just got incorporate those slowly into the system. If you try and force it all at once it's too much to digest, and hence when I talked about constitutions in new countries, you don't want to push those ones too hard. You may be agreeing with everything the UN said you should do, but if you push too hard it'll come back at you.

JB: Some of these Pacific Island countries seem to have taken steps backwards under governance or corruption clouds. What can the Commonwealth for instance do about that, or the Australias and the New Zealands?

JB: I mean the Forum tried that in sense, didn't it, (in Fiji) with Bainimarama after 2006.

DM: Yeah and I've had my meetings with Bainimarama, and you know he wants the best for his country. But the difficulty is, when one person's there for a very long period of time, things become stultified around that person. That makes change even harder. And that happened when I was dealing in Pakistan, very same reason, it gets rigid around one person. The great benefit of a democracy and elections and changing leaders and changing this is everything changes a little bit, and that's good. Democracies aren't something you can just fix in concrete and they're there forever.

JB: What happens when the change is so abrupt and so dramatic like in the United States, that it seems almost cataclysmic and likely to spread, what do you do then?

DM: Well the States will survive. The republic of the United States. They'll get through all this. I think President Trump has reversed on three or four majors things in a very small space of time. And I'm glad he has, rather than trying to overly beat up the judiciary or beat up congress or something like that. You know, democracy... the separation of powers must be taken seriously, it doesn't give one person total authority. It spreads the authority, and that's the essence of a democracy, spread authority.