The first Pasifika African theatre production in the world will take centre stage this week in south Auckland.

Titled 'In Transit' the play is based on real-life experiences of Africans migrating and living in New Zealand, told through African and Pacific storytelling traditions.

Sela Jane Aholelei was at the Mangere Arts Centre to find out more. 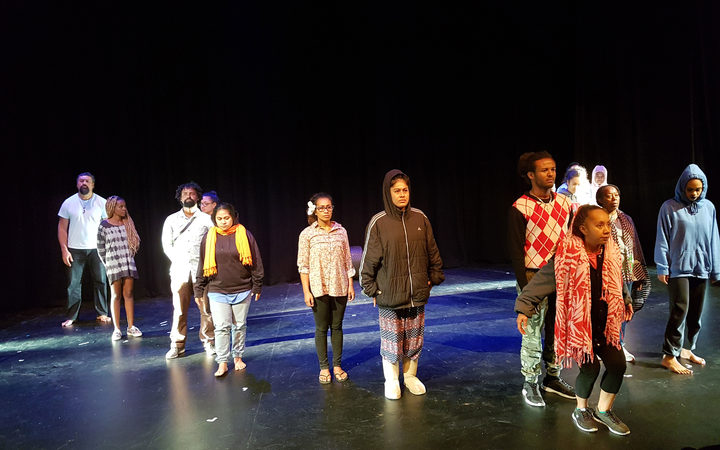 Based on true stories collected by Wanjiku Kiarie Sanderson, the show 'In Transit' revolves around eight characters sharing the stories of African refugees and migrants.

In the cast of eight, three are played by Pasifika actors, playing a variety of roles from an African father to a troubled teenage daughter.

Mr Nateoalofa says it was a massive struggle for him to get into and understand his character.

"The biggest struggle for me playing Niote was not being African and not knowing... like I know what Africa is about, but not really knowing it and then one of the African brothers said 'you don't have to look far. It's in your DNA already. You've got it' and that gave me the confidence to play."

A thought-provoking theme of intergenerational conflict between parents and first generation New Zealand-born children is prominent in the show.

'In Transit' highlights the truths of first generation Africans desperately wanting to be recognised as Kiwis, finding themselves, while showing respect to their parents and their culture.

Actor Sam Iosefo says his character as an African father, tries to educate his son on their cultural heritage and where he is from.

"Unfortunately his son in the beginning has moved more towards the western side of things where as part of the white culture he wants to do a role change because we're always stuck in the past. He wants to introduce a role change for the youth to educate the elders."

Mr Iosefo says there are definitely similarities between how African and Pacific people felt moving to New Zealand.

However, the stories do differ.

"We're fortunate enough that we didn't have to go through what the Africans had to go through by choice. It was basically the only option available to them to escape their country to come here as refugees, where as us guys, our families, it was a choice, either for us to hop on the plane or not or stay back in Samoa."

These stories are told not only through the actors, but also incorporate music and dance on stage.

Music director Poulima Salima says the Pacific elements used in the show includes the Samoan Pate, a wooden slit drum, to support the actions and emotions felt by the characters.

"It's definitely multicultural by way of the way we've orchestrated the music. The way we've used very popular Pacific motifs, themes, weaved it through the way we've accompanied the singers and the way we play it too."

Directed by the founder of Tala Pasifika Productions, Justine Simei-Barton, the show In Transit opens on the 4th of May to the 13th.