Fears Australians could be deported from Nauru

There are fears in Nauru that the Australian lawyers brought in to help 18 people facing charges over an anti-government protest two years ago, could be deported.

The Justice Minister David Adeang made threats in Parliament on Thursday accusing the lawyers of condescending behaviour and being disrespectful in the court.

One of the accused men, Mathew Batsiua, who is a former cabinet minister and a former secretary of justice, told Don Wiseman on Thursday night that they fear Mr Adeang will have the lawyers deported as the Nauru government as done on a number of occasions. 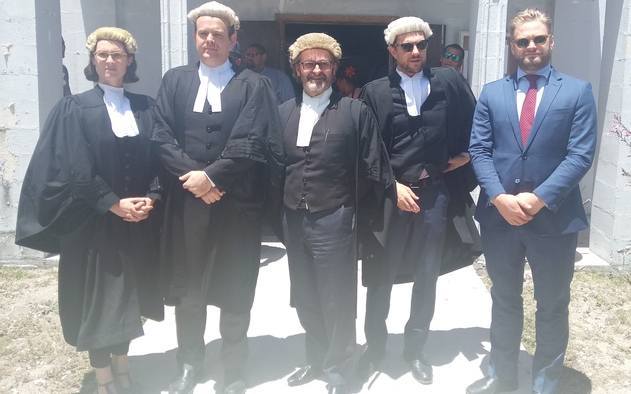 MATHEW BATSIUA: We have got five lawyers to defend us and our trial began on April 19th and today [Thursday] the Minister for Justice, in response to a question made some very threatening words and accused our lawyers of condescending behaviour and remarks in our court. And made some veiled threats against them. It was quite menacing and it was quite concerning for us to hear that. We are in the middle of our court case and at a very critical juncture of the court case, and to have those kinds of threats menacingly hanging over the heads of our lawyers is very unsettling and it's very unfair. Because the comments that the minister has made are baseless and they were designed, I think to sway the public opinion against our lawyers and in turn against our case. And it's very unfair and it is along the same lines of how this government has been very heavy handed against people who dissent, who express dissent, or do not favour, or criticise what they have been doing, and it's continued in this fashion. Now they are focussing on lawyers, accusing them of  misbehaviour and misconduct.

DON WISEMAN: When you say that they made threats,, what is the nature of the threat?

MB: Well he ended his response by saying that in a few days that something would happen. They were virtually his words - to that effect.

DW: So what do you imagine he's got in mind?

MB: Well we have seen the Minister deport people without due process over the past couple of years, so that was the immediate thing that came to our mind was that he might deport our lawyers, or force the court to take action against our lawyers or force the court to take action against our lawyers. And when I say force the court, if the court takes action, to de-register or do something against our lawyers, I think that will be on the direction of the Minister. And I say that there was an exchange between the Supreme Court judge and one of our lawyers when re things got a bit testy because the judge rolled his eyes while our lawyer was making submissions. So things got a bit testy between the judge and our lawyer on this one occasion, but it was resolved. Our lawyer and the judge resolved it amicably after that and both agreed to move on. That's the only exchange that I could say got a bit testy, but that wasn't any disrespect to the judge. An apology was conveyed, the judge accepted it and just said let's move on. And that was a few days ago. And nothing has happened since. If the court was to take action now, after a few days in between and especially after the remarks from parliament by the Minister, to me that would appear suspicious. Because to me then the Minister would have had a hand in telling the court to take action against our lawyer. So I think this whole thing, and the Minister using the Parliament to grandstand and to make accusations, knowing full well that he is hiding behind privilege, it is just unfair. It's unfair to us. It's unfair on the people that he is blaming, accusing of this kind of conduct and behaviour, and it just shows the general attitude that the minister and his government have been taking against those people who speak out against them. And threatening our lawyers in this way is just unfair, it's unjust, it's unwarranted and the accusations he has made are just simply untrue.