Operations by a Malaysian logging entity are at the heart of bitter divisions on Vanikoro Island, where ten men were arrested over a year ago for allegedly destroying logging equipment.

A Honiara-based teacher who is a Vanikoro native, Edward Pae, has recently been on his home island compiling updates on issues around logging.

According to him, the ten men were wrongly arrested.

He told Johnny Blades that like many locals, they were simply protesting their strong opposition to logging. 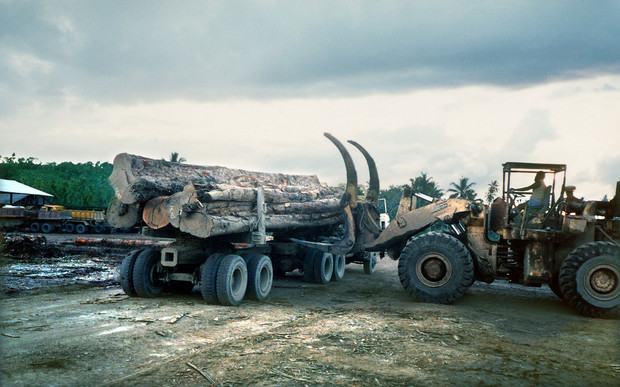 EDWARD PAE: Yeah the logging operations started way back in 2013, and the company that is doing logging on Vanikoro is Galego Resources Limited, a Malaysian logging company.

JOHNNY BLADES: Do they have government or community approval for the logging?

JB: How do the local community feel about the logging? There's quite a bit of it going on, I understand, in Vanikoro.

EP: Actually after I made awareness, I held awareness around the island, the communities around the island, their eyes have opened and they've seen actually what is behind the logging and who is actually benefitting off the resources of Vanikoro. And at the moment they are very, very sad and frustrated over the way they were tricked. They get logged and they never receive maximum benefit out of their very own resources.

JB: Can you say how they feel they were tricked?

EP: The local middle man promised that the developer would come in and do developments like improving infrastructure and roads, clinics, wharves. The developer also promised to build the airport. But up to now, they only cleared the land, but they never went into building it properly for planes to land. There's totally no infrastructure developments on the land at the moment. After five years, there's a lot of environmental damages done: rivers crossed, tabu sites illegally entered, and most of the water sources that villages or communities around Vanikoro used to use have been badly damaged. And now the people on the ground in Vanikoro are really affected.

JB: Has the provincial government been responsive to the concerns of the Vanikoro local people about logging? Are they listening, are they doing anything?

EP: To be honest Temotu provincial government hasn't done anything. They knew everything on the ground in Vanikoro, they know breaches that the logging has breached the law, the Solomon Islands Code of Logging practice and everything, but they did not take any action to prevent the destruction of Vanikoro and even to stop the logging. I believe that they cannot do anything because the Temotu provincial government also got revenue from the logging operation on Vanikoro. So that is why they cannot do anything to stop the operation there.