Transparency International PNG says it is happy the government has dropped plans for a ten fold increase in the charge for people standing in June's election.

But it says it is annoyed the government even considered it.

It was the only item on the bill for the final session before the House rose last Tuesday for the June national elections, but had been removed by the leader of House Business, James Marape, at the weekend. 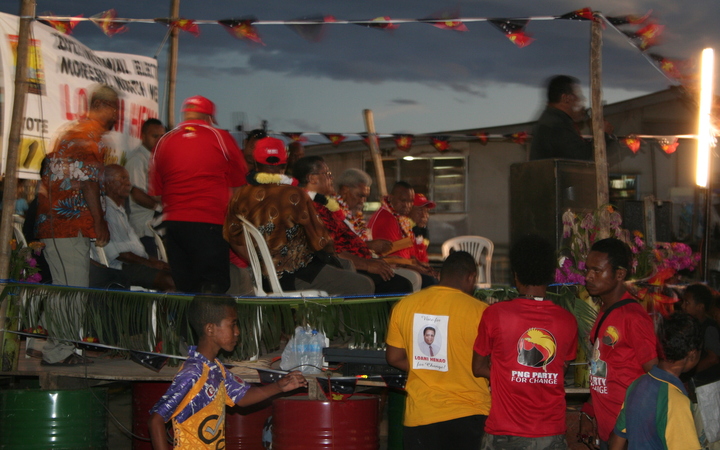 LAWRENCE STEPHENS : Very pleased that it was withdrawn and pretty annoyed that it was actually taken as far as it was taken. There is a sense that it may have been a way of distracting us from other things because it is just so blatantly wrong to try to charge nomination fees like this. 10,000 kina - it is a ridiculous punitive amount of money and it just shouldn't have even been considered.

DON WISEMAN: Do you think it would have discouraged people from contesting?

LS: It was clearly intended to discourage people who couldn't readily raise 10,000 kina. I believe it would discourage quite a number.

DW:  I mean at this point, even though there is a couple of months to go before the poll, there would have been people preparing and then thinking well I have got to pay this amount of money, so I won't. Do you think that people would have pulled out already?

LS: Nobody said that to me and I have been in gatherings of people who are intending to be candidates. I have heard people complaining about the proposal but I haven't heard anyone saying they had withdrawn because of it. That aside, we believe it was wrong and it sends completely the wrong signal about the nature of public service to the population.

DW: The government is still hoping that it can be reshaped and presented by the next government and they've talked about giving the money back or refunding the fee if you get 20% of the vote.

LS: I have not seen or heard that one so thank you for telling me about it but is sounds also not particularly helpful.   It comes back to this whole thing that people are serving the public. They are not buying their positions. They are being asked to serve and if we need ways of reducing the number of candidates putting their hands up and stepping forward. There are better ways than punishing them by forcing them to pay large amounts of money.

DW: What would you do in that regard?

LS: Well a very simple measure would be for a person to present a list of electors who have signed their support to his or her candidature. That would be a simple way of doing it and would at least show that there are X number of people who have said publicly that they support this candidate. If you can't muster a reasonable number then perhaps you should think about not standing anyway. One of the problems with additional candidates is that they can be used to split the vote or they can be used as a way of disrupting the vote and a way of strengthening one or the other person who goes to the extent of supporting one of the other candidates. One of the fears with the 10,000 fee was that one of the better off candidates will still be able to field candidates who would be spoilers cos they can afford to pay for it and legitimate candidates who simply didn't have the money to put their names forward would be somehow excluded simply because they couldn't afford it.

DW: This poll - it seems campaigning is already underway in various subtle forms. You have always obviously campaigned on this issue of transparency and making people aware of corruption. Do you think that these sorts of ideas are actively embraced by many of the other politicians and the prospect of becoming MPs?

LS: Unfortunately I have to answer no to that. It appears that we have people who large members of parliament who have been watching large amounts of corruption taking place and who haven't stirred themselves to make a change. We have come to the election, close to, and we were promised an Independent Anti-Corruption Commission. The legislation hasn't passed and it is actually too late now to pass it now so another promise that is hot air and we are not going to see that happen. And people are aware that the stronger you make anti corruption bodies, the more likelihood there is of individuals within those anti-corruption bodies looking carefully at the affairs of the people who actually vote the legislation through. It is intended as an anti-corruption agency and the issues we face with corruption are very much associated with elected and appointed leaders.