Claims of human rights abuses near a PNG goldmine

A Canadian mining giant is again under the spotlight following allegations of police brutality during the forced eviction of villagers near their gold mine in Papua New Guinea.

Barrick Gold claims to have taken steps to address an appalling record of decades of violence at the Porgera Mine.

But a spate of recent allegations has some asking whether it's doing enough. 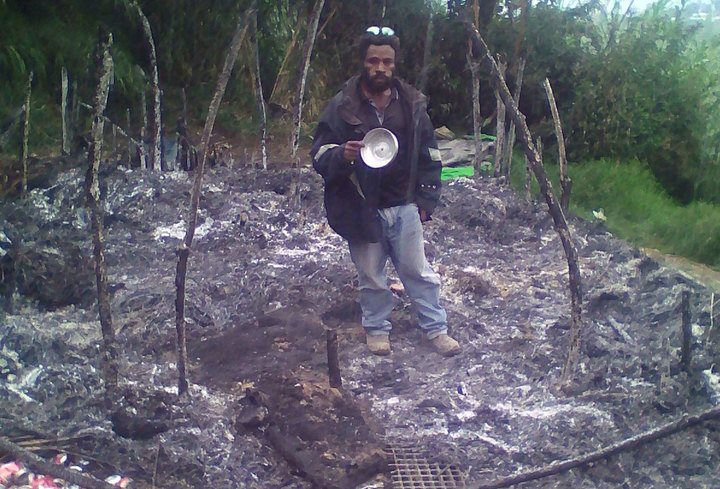 There are conflicting accounts of the police operation at Wangima village near the Porgera mine in late March. Cressida Kuala from the Porgera Red Warra Women's Association believes nineteen houses were burnt down in the early morning raid.

"Children and women woke up at around 4 o'clock in the morning. The police personnel who were hired by the company, Barrick PJV went up to the village and chased them out of the area."

The chairman of the Akali Tange Association Langan Muri says up to 50 houses were destroyed in the village, where about 100 homes were burnt down in two previous raids. He says they've received allegations police raped at least three girls during the latest operation and assaulted others.

"Police freely walked into the houses while they were sleeping and they have raped. The victims are still coming everyday to report to us. Some schoolgirls have been raped inside the houses."

Locals believe the raid was ordered by Barrick Gold, the co-owners of the Porgera Mine. The company has yet to respond to RNZ International's request for comment, but in a letter posted on its website it's denied any involvement or prior knowledge of the operation. The independent monitor of policing activities in the area Ila Geno backs up their claim that police conducted the raid under a court warrant after evidence of illegal activity was found there.

But Sarah Knuckey, the director of the Human Rights Clinic at Columbia Law School, says the exact nature of the relationship between Barrick Gold and police at the mine is unclear.

"There is apparently a written agreement between the government, police and the company but it's never been made public and when you speak to police there, they say their accommodation, their food, their fuel is funded by the company. But it's not easy to tell what the command structure is for the operations."

And for Catherine Coumans from MiningWatch Canada, Barrick's denials are problematic.

"If the company really didn't have any knowledge that this was going to happen then it clearly needs to question why this gross violation of human rights on the company's mine lease area, without the company knowing about it. And if the company did know about it then the company needs to come clean and account for why it's asking police to carry out these raids."

In the past few years Barrick Gold has undertaken measures to address longstanding concerns about abuses at the mine. Compensation has been paid to more than 130 women for acts of sexual violence and gang rape committed by security guards and police. Cressida Kuala says that remedy for victims is not enough and not everyone has been compensated. But she says steps by the company to improve training of security personnel had been making women feel safer - until now.

"Barrick is trying its best to train its police and the security on human rights disciplines. And it looks like police are aware of the human rights laws and still they are going ahead to do these things. I don't know why. The police said they were just doing their duties on Barrick's order."

Sarah Knuckey from Columbia Law Schools says steps Barrick has announced such as improving the training, monitoring and reporting structures of police have been good on paper. But she says they're still seeing serious allegations of violence at the mine and there needs to be more transparency about what the company is actually doing to respond to them.

"Over the last few years we saw a noticeable improvement. People reported feeling safer. However recently there's reports of the village burning as well as the accompanying physical and sexual assaults. There's also another report of a different set of sexual assaults two weeks prior and of assaults last year that the company has never responded to."

Independent policing monitor Ila Geno, whose position is financed by the Government and Barrick Gold, says he's also very concerned about human rights. He says the company is addressing the issue but individual police officers must also take responsibility.

"Training is adequate but the individual police application, that's an issue where individual competency of a police officer in complying with those instructions."

But Tyler Giannini, a director of the Harvard Law School International Human Rights Clinic, says much more needs to be done to stop the cycle of violence. He says divisions between the company and the community run deep and trust needs to be built.

"Any complaint mechanism that they create needs to actually address all of the problems that the community has faced not only sexual violence, but also killings, assaults and deeper environmental issues that have been longstanding in the community. Until that happens I think you're not going to have a stable development situation in the area."

Human rights advocates are calling for the relocation of the 50,000 to 60,000 villagers who live near the mine. Sarah Knuckey says people tell her they are living like dogs and pigs just a few metres away from its factories.

"People are frequently sitting in tailings waste from the mine. They drink water out of blue buckets. They're full of mosquitoes and dust and leaves. In many villages all night long you can hear the sound of the trucks very loud. The children find it very hard to get to sleep."

Ms Knuckey says everyone who lives at the mine feels the "injustice of being the original owners of the land and the gold underneath it and seeing it literally being flown out of the country" while they live in squalor. She says the Canadians who own Barrick Gold would never accept such terrible conditions for their own families.