MPs, who had gathered for the conclusion of PNG's ninth parliament before it adjourned for the general elections in June, gave sir Michael a standing ovation.

Sir Michael, the outgoing East Sepik Governor, is one of the longest serving parliamentarians in the Pacific. 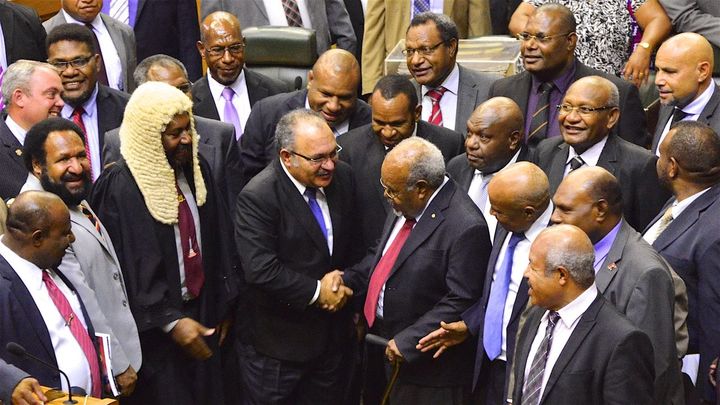 JOHNNY BLADES: So this week marked 49 years since Sir Michael first entered the House of Assembly in the Territory of Papua and New Guinea as a politician. He's one of the authors of Papua new Guinea's constitution. He was instrumental in ushering it to independence. He served as the country's first prime minister from 1975, and has had three different stints as prime minister, spanning sixteen years. So I think along with fellow veteran PNG leaders Sir Julius Chan and John Momis, he has been an elected leader longer than anyone in the Pacific. And across the region he has massive mana. Somare forged a reputation as a charismatic leader. He just had that gift of being able to connect with people, young and old, where ever he went: Fiji, Samoa, where ever.

KOROI HAWKINS: What did Sir Michael say in his farewell speech?

JB: Well he spoke about the honour of serving Papua New Guineans, how proud he was to be known as the 'Father of the Nation'. He also spoke of his dedication to public service, and the commitment that he and all MPs make when they swear on the bible to serve the people. Interesting, he recalled how the drive to gain independence back in the 1970s was about proving that PNG's indigenous people could rule themselves. And he has sort of said that despite the challenges, forty-odd years later, they've done that, which is no small feat given the eight-hundred-plus tribes and sheer diversity of PNG. And he as much as anyone is responsible for that. I think the parliamentarians also recognise that. But the other thing, he talked about the importance of national unity and interestingly, given that he was talking to other MPs, the need for politicians to respect the country's democratic institutions and particularly the parliamentary systems.

KH: The current prime minister Peter O'Neill also gave a speech, paying tribute to Sir Michael's career. They have been political enemies though quite recently, haven't they?

JB: Yeah, really bitter enemies at some stages in the last, say five or six years. Of course there was the big impasse of 2011/2012 when Sir Michael Somare, due to his prolonged absence from the House due to ill-health, controversially a vacancy was declared in his seat and he was ousted. They replaced him, the parliamentarians replaced him with Peter O'Neill. That was subsequently deemed unconstitutional by the Supreme Court, but effectively the majority of MPs by that point were supporting the O'Neill regime and so blocked him coming back (to power). But he did win re-election (to the East Sepik regional seat) in 2012, which he saw as vindication. But he has always maintained he didn't accept the way he was removed and I think a lot of people sympathise with that. Nonetheless, Peter O'Neill did say some appropriate things (at this final parliament session). He said that all of them are in debt basically to Somare for his wisdom, his leadership, his guidance of the whole country. And he paid tribute to Lady Veronica, Sir Michael's wife, who has been married to him for over 50 years, about what a great service she has given to the country by supporting him so well throughout all these years. And I think everyone agreed with that.

KH: That was quite a nice gesture, wrapping up parliament for this term, apparently, and now the country is firmly in election mode?

JB: Yeah, that's right. Firmly in campaigning mode ahead of the June elections. But of course there's been a lot of turbulent politics lately, even within O'Neill's own ruling government. So it's going to be an interesting time. And after the various speeches yesterday, saluting Sir Michael and his legacy, at a function after the parliament session, the Grand Chief himself took the mic again. He said he wished the MPs the best of luck for the campaign, and he told them not to curse each other too much...which drew a laugh. he knows how passionate things are going to get in the next couple of months.