The government of Solomon Islands is reaching out to donors for assistance in building a craft market facility for indigenous craftspeople.

For many years there has not been any such facility in Honiara for carvers, weavers and basket makers, forcing them to sell their wares along the street, often displayed on cloths on the ground.

Concept designs for the $US1.2 million dollar facility have been completed and it is to be built around the perimeter of the Art Gallery grounds in Point Cruz in downtown Honiara.

The director or culture division in the Ministry of Tourism, Dennis Marita, spoke with Koroi Hawkins about the project. 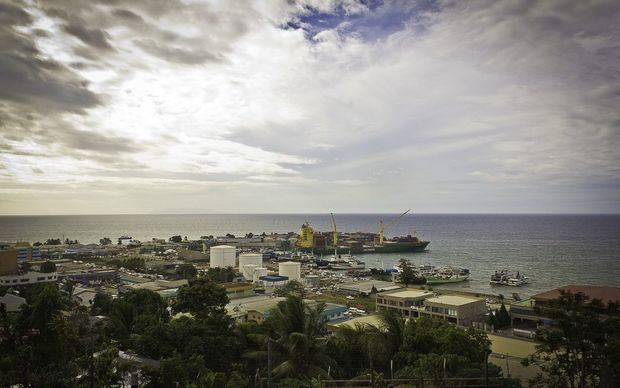 DENIS MARITA: Actually it is more or less like a market stall for vendors. This is to cater for arts and crafts people to have at least you know a decent venue where they can be able to not only exhibit but as well as sell their products. Taking into account that what has been happening here over the years our cultural producers, artisans have been sitting along the road pavements along the way exposed to dust under tents. I think it is about time that we provide a conducive environment for them to sell their products. And also taking into account that most of these products are uniquely ours. They are cultural products and most of them they reflect our cultural diversity here. So taking into account that culture is an important part of our society, it is about time that we provide a venue that is not only conducive but at the same time has some sense of dignity in what local art and crafts people have been producing in the country,

KOROI HAWKINS: And you have a venue in mind already?

DM: Yeah already we have a final design. We have a concept and we have a final design for the infrastructure or the facility and the facility will be built along the perimeter of the fence at the National Art Gallery grounds. So where the fence is now that demarcates the boundary of the art gallery area. That is where the craft centre will be built. So that will replace the current fencing. Instead of seeing a fence [like] at the moment what is being seen at the moment we will have this craft centre.

KH: This is something that crafts people have been calling for quite a while as you say, they are selling along the streets and wherever they can actually display their wares. Have you had much consultations with the artisans themselves?

DM: Yes actually this initiative came up last year and we have had consultations with the artists especially the artists association, the handicrafts people and I think everybody is aware of this and they are very much looking forward to the establishment of this facility. And so it is very much welcomed here publicly and there has been comments in the News Paper as well regarding this project and as you rightly said it is an overdue outstanding kind of a project that a lot of our people are looking forward to. Taking into account that this is part and parcel of what we are embarking on under our, my department of culture within the ministry of culture and tourism is the strengthening and development of the cultural industry sector. And I think this is part and parcel of this. And much of the engagement of this particular are it is in a sense it covers the whole country because when you are talking about the traditional and cultural products it is something that is within everyone and much of our people are very much accustomed and they have this traditional knowledge of making handicrafts and all that. And so it will seep out. The benefits of these facilities will seep out to the provinces. Where much of the handicrafts products are being made.

DM: Yes we have the final design and the final costing for this infrastructure is $SBD11 million which is approximately about $US1.2 million. We have some funds available at the moment at the government level but not sufficient enough to complete the project. And so we just had a consultation with donors just this week. With donors and relevant ministries that have a, can have an input into this project in line with the current government's policies. And so we met with the relevant ministries like the ministry of women and youth. Ministry of Foreign Affairs and External Trade and Infrastructure. And we were fortunate to have some donors who were present at the time. That includes Japan, New Zealand and Taiwan. And there has been a lot of positive feedback from after the presentation. Seeing the essential and the relevance of this project to contributing to national development and so there has been some positive feedback in contributing towards this infrastructure.