Call for Fiji Times sedition charge to be dropped

Amnesty International says sedition charges against The Fiji Times could have a chilling effect on freedom of expression and other news outlets in the country.

The Fiji Office of Director of Public Prosecutions has charged the newspaper with sedition after earlier accusing it and its senior staff of inciting communal antagonism over a newspaper article.

The case relates to an article published in the vernacular iTaukei newspaper Nai Lalakai on April 27 last year.

Amnesty's Pacific Researcher Kate Schuetze says the charges are very serious and should be dropped.

Ms Schuetze told Tim Glasgow the case shows there is still suppression of freedom of expression in Fiji. 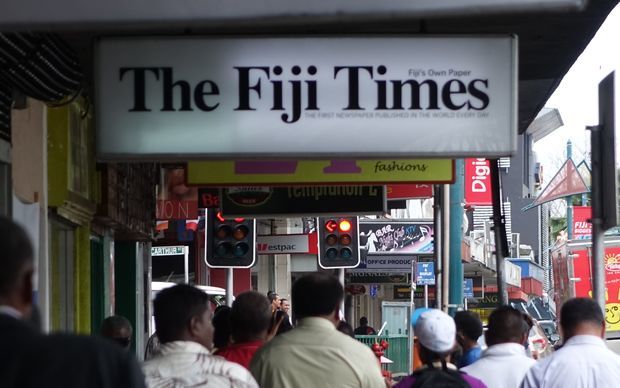 KATE SCHUETZE: We think this is an extraordinarily heavy handed response by slapping these charges on the Fiji Times and it's not the first time that they've done so.

TIM GLASGOW: Why, in Fiji, do you think it's particularly important that these charges are dropped?

KS: We've had a history of the suppression of the freedom of expression in Fiji, it wasn't that long ago that newsrooms would remember having military and other censors in their rooms censoring what came out from the publications and we've had the government trying to tell us that everything is fine in Fiji now that they've had elections. I mean the fact they're going after the newspaper it highlights that those issues are not in the past where they should be. They're not where they should be, there are still problems with freedom of expression with government failing to respect the rights of anyone to express critical or controversial views in the country.

TG: How do you think these charges will be viewed in a wider sense if they're upheld?

KS: If they do impose prison sentences, we would of course regard them as prisoners as conscience  - which means they are prisoners solely for peacefully expressing their views. In the wider sense I think there it is an expression that there is still suppression of freedom of espresso in Fiji. Particularly around issues where people are trying to express views on racial tensions of the past - you cannot move forward from the legacy that Fiji has from the two culture, from the division of the two groups. Unless you can have frank discussion about these things, sometimes those discussions might be painful, sometimes people might be offended.
But there is no forum to air those voices and express those opinions and express those opinions in Fiji. Which is a really challenging problem that has been raised by a number of human rights activists and the way they work and their ability to speak out and criticise government on certain issues.

TG: What implications do you think that a ruling such this, and even the fact that it's going to trial will have for the overall media in Fiji and the flow of information there?

KS: These sorts of case have a chilling effect on the freedom of expression in Fiji and the country and other news outlets there, of course we are talking about a small country with very few news outlets and here we have one - The Fiji Times trying to play an independent role and that's been not without difficulty. If the government wants to convict them of sedition - that's a very serious crime, that's a very serious offence against the state. It's very remarkable that the government thinks their hold is so fragile that a letter to the editor could essentially destabilise the government and that's essentially what they're saying by bringing these charges.