A new anthology of literature by Papua New Guinea women is challenging the traditional attribution of women's successes to a male reference point.

My Walk to Equality was launched this month in PNG and Australia, a milestone publication of poetry, fiction and essays written by 45 PNG women.

One of the contributors to the anthology is Elvina Ogil, an Australia-based lawyer and writer who hails from PNG's Mt Hagen.

Ms Ogil's foreword to the book argues that PNG as a nation should embrace both literature and the notion of gender equality.

She spoke with Johnny Blades. 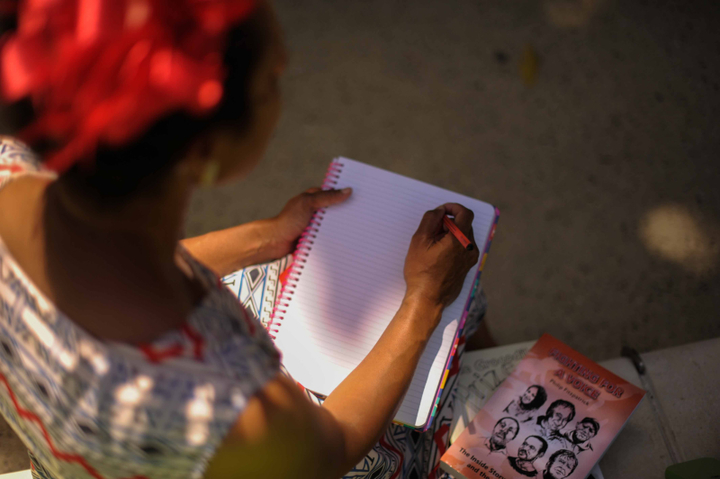 The anthology 'My Walk to Equality' is published by Pukpuk Publications, and edited by Rashmii Amoah Bell. Photo: PNG Attitude / http://asopa.typepad.com/

ELVINA OGIL: I don't want to overstate it but I think it's a bit of a landmark publication. First of its kind of indigenous women contributing to literature. And it was open to women across the country, Papua New Guinean women. And 45 women took up that opportunity to contribute. So the breadth of stories in there is quite impressive.

JOHNNY BLADES: And you've got women from a range of ages and vocations, yeah?

EO: Yes. Women from all around the country. Younger women in their early teens right through to women in their forties. And they all do various things with their lives: teachers, lawyers, mothers... across the board really.

JB: Would you say this anthology is an attempt to break through the stereotypes of females in Papua New Guinea?

EO: Yes, and I think it's also... For example, I read today in an article, and I tweeted about this, women's successes in PNG are still attributed to a male reference point. And we wanted to make this something completely our own, to remove that male reference point. And I think that we've succeeded, really. It is really a breakthrough. Mind you, literature is still very under-developed in PNG, and that's quite a sad fact considering the types of stories that we have in that country. But my great hope, and I think a lot of the people that contributed to this anthology, is that it will become a classic of PNG literature, a book like 'My Mother Calls Me Yaltep', which is a book that I read when I was a teenager, and I placed such a high value on that book. And so that is what I hope this anthology becomes in the future.

JB: How helpful is it, for PNG women, that sort of tag of victimhood, which is quite well canvassed, isn't it?

EO: The subjugation of women and perhaps levels of victimhood exist, and they're very real experiences for a lot of women. But I think what this book is, and Dame Carol (Kidu) highlighted this when she attended the launch in Port Moresby, this book isn't a whinge, it's not a complaint, it's more a chronicling of the progress we have made and how far we still need to go. So it's full of hope as opposed to anything else. It's quite an uplifting anthology actually. And I think what we tried to do is remove that really reductive conversation that we have. I was saying today, when you talk to a successful Papua New Guinean woman or an accomplished Papua New Guinean woman, in mainstream media in PNG the question is always 'who do you attribute your success to?' That question is never asked of men who are successful in PNG. No one asks them who they attribute their success, but in PNG we have to ask a woman 'who do you attribute your success to'. I find that question if not sort of offensive, a little bit funny sometimes when I hear that being asked of women.

JB: How important do you think it is for PNG the country, that the capabilities of women are brought to the fore, that are utilised rather than under-utilised?

EO: Extremely important. I hope that when we talk about it now, that we don't discount the role women have played in our traditional societies. I don't want to mythologise our history, because there are lots of aspects of our cultures that perpetuate the subjugation of women, but at the same time there are aspects of our culture in which women have played a significant role and continue to do so. So, you know, it can be a very narrow focus when we say this is how Papua New Guinea women should travel in the future. But we must also acknowledge the path where they have come from. Particularly in a lot of our societies that are matrilineal, women still have a significant role of leadership, and that's a fantastic thing, and lessons that we can learn from today.

JB: Our literature, our stories, they're never captured quite as much as they should be, but you've got to try, you've got to start somewhere. So this is, you're hoping I suppose, the sign of more homegrown literature?

EO: I really, really hope so. I said in the foreword that I contributed to the book that how does a nation record its progress if not through literature. And I think that this is a huge step forward for Papua New Guinea as a whole. I hope that both women and men embrace this.

My Walk to Equality is published by Pukpuk Publications, and edited by Rashmii Amoah Bell.