The author of a book about traditional navigation methods says the Marshallese art of wave piloting still has relevance today.

Harvard Science Professor John Huth says his book The Lost Art of Finding Our Way has helped spark interest in the technique of using ocean swells to navigate which is being revived in the Marshall Islands.

He explained how it works to Jo O'Brien. 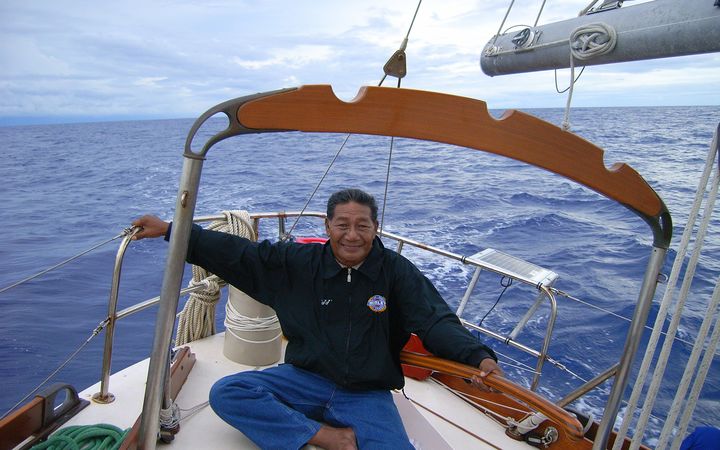 The late Korent Joel pictured on a navigation teaching trip in the mid-2000s in the Marshall Islands. Mr Joel was one of only a handful of Marshall Islanders who still knew traditional wave and star navigation. Photo: Supplied / Alson Kelen

JOHN HUTH: What the ocean swells do is they refract around the islands and the atolls so you can get kind of a shadowing effect on the leeward side, that is to say away from the wind direction of the trade winds, and some times you'll get a crossing pattern where the waves will, from the tradewind swells, will bend around the island so you'll actually get two sets of waves that are crossing at an angle so you could tell that you are on the leeward side of the island. Also they can see reflected swells that come back from the atoll and those are difficult to pick out but the good navigators can see them. And then there was another phenomenon called dilap and that seems to be a path of disturbed water that links pairs of atolls and what the navigator does is to try to get on this disturbed path and then follow it from one atoll to the next. And that can be seen for quite some distance, the reflections and the refractions are maybe 20-30 miles out but then they peter out, but these dilaps apparently can be seen all the way across gaps of 100 miles or more.

JO O'BRIEN: And how effective is that method of navigation? How accurate?

JH: It seems like it was extremely accurate for the most part. The one thing that would throw people off was if a current set in that was not anticipated. I would say they had probably about a ninety percent success rate and the ten percent that wasn't successful they could eventually find land but they had to kind of hunt around to be able to find it.

JO: Obviously we are in a different era now with modern technology. Does wave piloting still have some relevance in modern times?

JH: It's an interesting question, I was just talking to somebody who had this great fear of being out on the open ocean because she felt disoriented and so I thought about it a little bit and over the years I have kind of made a habit when I'm out to see to look at what the waves are doing and start to interpret them and over time you start to develop some facility and it's very calming. It's a way of opening up your mind to what's going on because the waves are always present and there's so much information in them at first, it can be overwhelming, but over time you start to notice these regularities. So I would say even with a GPS system which can fail you have this other way of verifying where you're going and try to keep your orientation so I think it does have utility still.

JO: And your book has it helped to spark more interest in this technique?

JH: Yes I've given talks around to a number of groups, sailors which you might imagine would be interested in this, sea kayakers as well and it's a skill that can be taught and they're quite interested in it. It's not something that people are running to my door and saying teach me wave piloting but it seems to be spreading and I was cheered when I saw that the Polynesian Voyaging Society has a lot of the same knowledge and they're propagating it to other people as well.