An Aboriginal artist says she will continue advocating for West Papua's independence despite a mural she created being destroyed without explanation.

Larrakia elder June Mills painted the mural onto a large wall in Darwin in 2015 and says it represented the solidarity between indigenous Australians and West Papuan people.

However the mural, which depicted both the Aboriginal and West Papuan flags and two hands reaching out, was painted over on Sunday.

June Mills says it's not clear who is responsible and she's upset and surprised by what she describes as skulduggery and a clandestine approach.

However she told Amelia Langford that she's determined to continue advocating for indigenous West Papuans and their battle for independence from Indonesia. 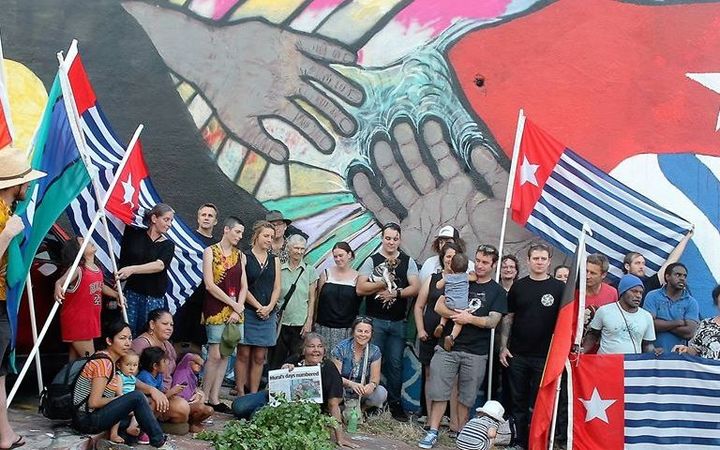 June Mills surrounded by supporters in front of her mural that was later painted over. Photo: June Mills

JUNE MILLS: We want to help in whatever way we can. To me it's just a simple friendship mural, but the way that it's created such controversy within the community was not expected, put it that way.

AMELIA LANGFORD: How did it feel to see the mural painted over like that?

JM: Oh very upsetting. It was a beautiful, beautiful mural. it took a lot of hard work. People actually loved the mural. I don't know if you had an image of it, but people would come specifically to take a photo. Id joke about it with my mates, I'd say 'listen we really have to get a really good photo of this and turn it into a postcard saying 'greetings from Darwin',' you know. And that didn't actually eventuate, but this was a well-loved mural, but there was an element in Darwin that hated it and wanted it gone. And that's been going from the first day really, and they got their way.

AL: What would you like to see happen from here in this situation?

JM: Put up another mural! Repaint it.

AL: So you'd like to get the opportunity to repaint it?

JM: I don't believe that's going to happen, however, we certainly have plans to paint other murals. But the amazing thing is the incredible skulduggery that's come to the fore throughout this. i must admit I was caught by surprise a bit to the extent of it. But, you know, I suppose if we really pulled it to pieces the thing is that our community  and myself are very concerned about the plight of the West Papuan people - that will never go away until something happens and they get their referendum and the call for independence or the violence stops in West Papua. There is incredible violence as we speak. Until that's resolved we are not going to stop bringing to the attention to the world community about the plight of the West Papuan people. And whether that's posters, whether that's murals, whether it's talks, whether it's forums we are going to continue.