A small Micronesian startup is attracting international attention with its vegan wallets and paper products made of banana fibre.

The company, Green Banana Paper, is based on the small island of Kosrae, which has a population of just over six-thousand.

Its founder, Matt Simpson, who is originally from the US, says his goal was to create an environmentally-friendly company that also created jobs for the local community and farmers. 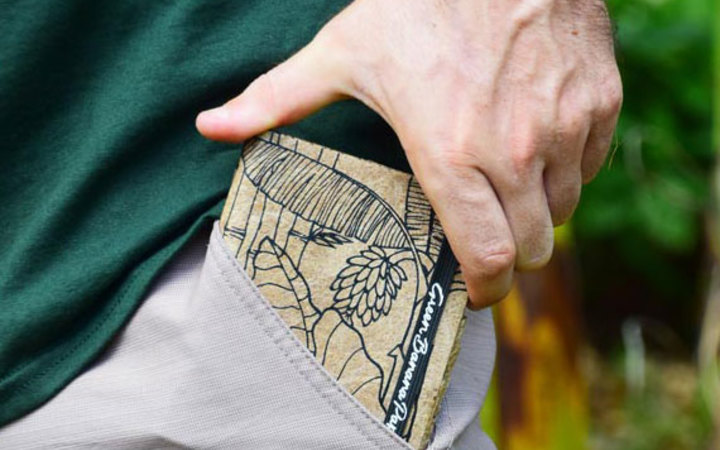 MATT SIMPSON: We have fruit trees everywhere, that's what we have most in abundance. Banana trees are just in everybody's backyards - frontyards, sideyards, in their jungle farms and when I learned that you cut down the tree after you harvest the banana, because they only fruit one time and you need to make room for the next side-shoot to grow up from the base - so you cut down the tree and it becomes kind of a nuisance - kind of a waste - and there's no use for it traditionally. So, I figured that I could help farmers earn some extra income and create something sustainable from a organic waste resource, that's rapidly renewable.

AMELIA LANGFORD: I didn't know that - so once a banana tree bears fruit - it only does it once?

MS: It only does it once. Banana trees - it's actually a giant berry and it self-multiplies so by the time the main shoot is producing fruit, there's already two or even three side shoots...so you don't need to work hard to grow bananas - they self-reproduce. It's a beautiful thing - that's why it's rapidly renewable - it's only a 12-month growth cycle for most of the varieties too and they grow very tall.

AL: So tell me, I know you're interested in the social benefits to the community as well, how many farmers does this involve?

MS: So, our island has 6000 people. Mostly, the only jobs are government jobs and we're kind of a welfare economy relying heavily on foreign aid. So, everybody is a subsistence farmer here, everyone has family farms, and everyone is a banana farmer, which is the beautiful thing about this. So, we've bought banana trees from over 75 farmers and we also employ about 21 people right now and I really hope based on our sales, and the more orders that we can get, we can hire more people and also potentially take this to other islands, where it is also feasible.