Children as young as 7 are working on the streets of Samoa's capital, according to the International Labour Organisation.

The report, which was launched this week in Samoa by the Minister of Labour and State Owned Enterprises, found a total of 106 children working on the streets of Apia interviewed over a week in September last year. 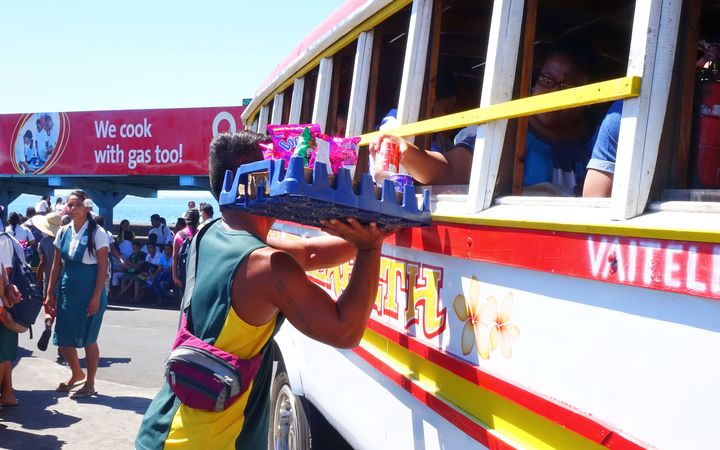 Street vendors at the Apia bus station can be seen winding in and out amongst the colorful Samoan buses selling food and drinks to passengers. Photo: RNZI/Koroi Hawkins

The study found children are working for long hours as vendors selling food, juice, razor blades, sweeping out the leis and lavalavas, or sweeping market floors.

A seven-year-old vendor was asked what she thought about her work. Her words were included in the ILO's report:

"I do not feel safe with the work that I do and I feel that I'm too young to be walking around all day selling pies. When I see children in their uniform going to school, I have this dream that I'll be one day going to school too. I want to be able to read and write."

The report also raised concerns that some children were involved in the worst forms of child labour including begging and selling drugs, and some were at risk of sexual exploitation.

Our correspondent in Samoa Autagavaia Tipi Autagava says this is a very worrying situation.

"Children are still being seen late at night selling all sorts of small goods in town. And some are also seen selling leis or flowers in some of the night clubs that are very close to the main wharf in Apia."

Field researchers found most of working children surveyed were not in school, while 9 children had never been to school at all, mostly because of financial reasons.

A 13-year-old orphan, who said he left the home he was living in because he was being mistreated, also had his experience living on the street printed in the report.

"I sell chips and other food and drinks I can get. I usually have one meal a day and I sleep at the bus station area. I enjoy my work when lots of people come to buy my stuff. My worst moment at work was when my stuff was stolen."

The report called for a concerted effort to provide working children with education, counseling, and remedial support.

It called on the government to implement awareness campaigns, and to establish a monitoring and enforcement regime.

The Minister of Labour, Lautafi Fio Selafi Purcell, in reaffirming his government's endorsement of the report, said it was only possible because of the children's bravery.

"I would like to thank all the working children who bravely participated in the research and the officials and representatives from all agencies and organisations who tirelessly worked to identify and interview these children."

The report also calls for programmes to address poverty and youth unemployment, as well as help for the parents of working children.

The government has made a commitment to work with all its stakeholders to fulfill the report's recommendations.

This is Koroi Hawkins