Guam's role as the forward strategic point for the projection of US force in the Asia Pacific has made the Micronesian people of this island an unwitting target.

But while local support for the US military on Guam remains strong, mixed feelings are growing over evolving geopolitical tensions. 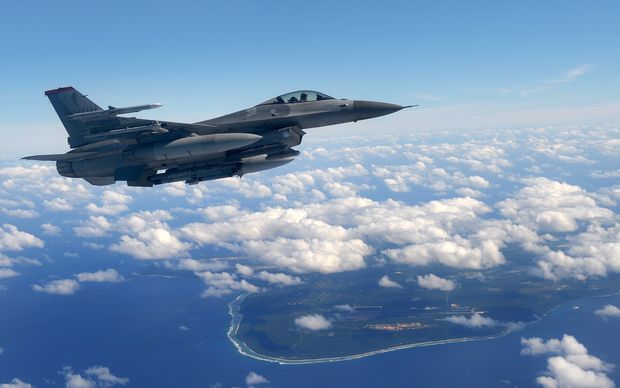 The THAAD system was deployed to Guam in 2013 after reports emerged of North Korean nuclear tests.

"The first one was South Korea's senior military officer and since then we have had a senior civilian official from Japan - their equivalent of the secretary of defence. They really got a whole tour of the island and more than just THAAD. Although, they did visit THAAD."

In Guam late last year, the US military commander in South Korea, General Vincent Brooks said while it sought better alternatives than war, the US remained ready if North Korea chose to escalate aggression.

"Let's be clear, if something were to happen, or if things continue to go in the direction they're going, Kim Jong-Un and the North Korean regime must accept responsibility for anything that comes as  result, and that's really the answer, what comes next - their decision."

What has come since then: North Korea launched four ballistic missiles into the sea off Japan two days ago.

It may be just another bout of military posturing from Pyongyang following the latest joint US-South Korea military drills.

However, in response the US has deployed a THAAD to South Korea, which - due the system's radar capabilities - has angered China.

Michael Luhan Bevacqua is an adjunct professor of Chamorros Studies at the University of Guam who has specialised in the island's position as a heavily militarised space.

He says there is a feeling among Guam's indigenous community that the more militarised it becomes, the more of a target it might become given its proximity to competing geopolitical interests.

Professor Bevacqua says the US makes clear that Guam's value to it is that it is on the front line against those considered threats or potential enemies.

He says the rise of US President Donald Trump and his impulsive rhetoric leads to uncertainty, exasperating a feeling of vulnerability on Guam.

"China has developed "Guam killer" missiles so-named specifically for our islands because they see our island as a threat to them because of what the US military puts here. Chinese are not developing missiles to destroy the Pacific island people, they are developing them specifically for us because the US uses us as their forward strategic point for projection of force."

It remains unclear whether North Korea's ballistic missiles have the range to reach Guam.

However a military build-up on Guam, including the relocation of thousands more US marines from Japan in the next few years, means the Micronesian island remains very much in the thick of things.