Scientists have discovered a living fossil in American Samoa at a depth of more than 4000 metres while exploring the ocean floor.

The United States' National Oceanic and Atmospheric Administration and its partners on the Samoa Expedition and have made several startling biological discoveries at least a dozen of which are believed to be new animal species.

These include an anemone resembling a Venus Flytrap, a jellyfish that looks like a spaceship and a fish walking along the ocean floor.

But the expedition's lead biologist Santiago Herrera of Lehigh University said his favourite discovery was being able to observe a live one shell mollusc, only known from fossil records until several specimens were dredged up from a deep trench off the Pacific coast of Central America in 1952.

He spoke with Koroi Hawkins who began by asking him why he thought the expedition was making so many amazing discoveries. 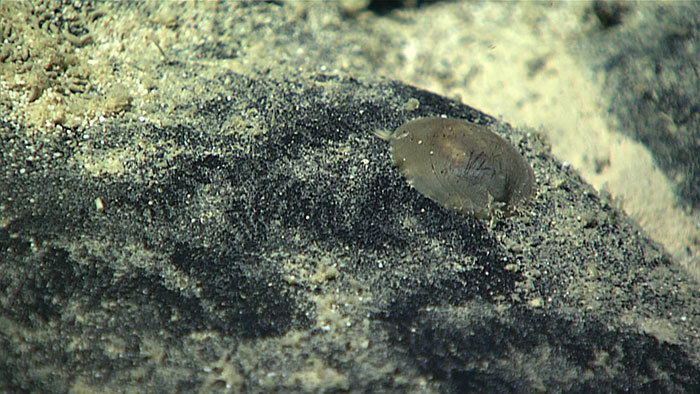 Close up of a monoplacophoran mollusk, 2017 American Samoa. Photo: Image courtesy of the NOAA Office of Ocean Exploration and Research

SANTIAGO HERRERA: Yeah, I think part of it is being able to use new technology, so this platform and the transfer and the ROV Deep Discoverer (or D2) which is a nickname for it, they have a really amazing set up of high definition cameras and especially the signs lighting system that allow [us] to make amazing observations and the cameras have such a great zoom-in detail that it's like  looking under a microscope while you're on the sea floor. And another technological piece of it is Telepresence technology that allow us to have excerpts all from different kinds of views.... As I was mentioning we have over 180  scientists following the dives and the expedition so we are able to have all the expertise available on call, it's just something that we normally don't get to have and we go on an expedition. Another big factor was also the fact that we have is the fact that the area that we were visiting in American Samoa - this whole area of the Pacific is very poorly known for what lives in its waters below 200 metres, or maybe it's the depth of scuba diving, so like 40-50 metres. This expedition was one of the pioneering serious expeditions that is continuing to happen this year, that is going to allow us to understand those biodiversic patterns and to understand and the diversity of species that line in the Pacific and central area.

KOROI HAWKINS: I understand with the organisms that you're finding and the animals you're finding some of them might be given Samoan names for their biological names, is that right?

SH: The naming of those new fishes is really up to the expert that makes the description or the characterisation. So this is a process that is long and involves comparing the specimens that were collected to all the other specimens that are known from a particular group of organisms. After that process is completed - it can take a few years - but the naming of species is up to the person who describes it, but we do have the commitment to at least encourage those experts to try to give Samoan names to those fishes that were collected in those waters, and that's just a way to honour and be grateful for the opportunities that the Samoan people have given us to do this work in their waters.