Vanuatu proud of Tanna despite missing out at Academy Awards

People in Vanuatu remain very proud of the film Tanna despite the disappointment of it missing out on an Oscar at this year's Academy Awards.

The Australian film, a love story, was shot on the southern Vanuatu island of the same name and featured an entire cast of actors from the Yakel tribe all of whom had never seen let alone acted in a feature film before.

It was nominated in the best foreign film category which was won by The Salesman  by Iranian director Asghar Farhadi.

Hundreds gathered at the national conference centre in Port Vila on the day to watch the Academy Awards live and support the film.

The media director of the Vanuatu newspaper the Daily Post, Dan McGarry was at the live screening.

He spoke with Koroi Hawkins about the people's view of the film in Vanuatu. 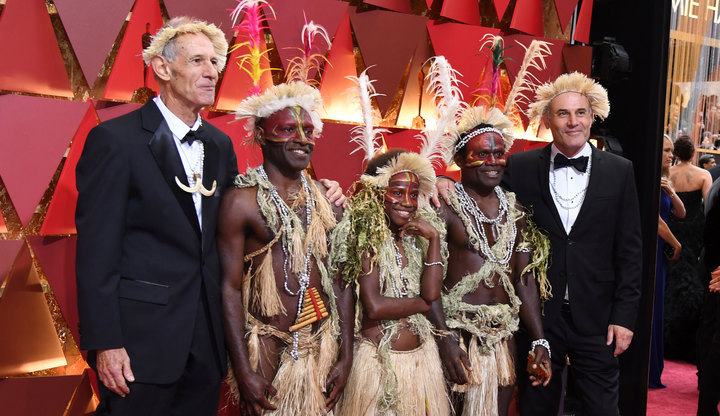 DAN MCGARRY:  Well it's an interesting thing, there is very little awareness of what the Academy Awards actually represent. If this had been a football team, for example moving into the world cup contention people would be dancing in the streets and business would be shut down. but once people began to conceive of what this meant on the global stage they really began to change. So the excitement in the audience today while people were listening, it was palpable, people were really gung-ho for it.

KOROI HAWKINS: I saw your tweet of the audience in traditional dress, that was quite cool I thought.

DM: Yeah, the Tanna community showed up. I'm actually looking at the photos right now to process them. There were about 40 people coming, men and women, young and old and they came and performed a series of custom dances and then led a procession into the auditorium itself and then sat and watched the proceedings. I think this was a first for the convention centre and probably a first for the members of the group as well.

KH: And how did they respond when the Tanna movie was highlighted?

DM: Well it was over in an instant. They just announced each of the movies and then they go straight to the winner and so everybody almost didn't have time to get excited for the deflation of the moment. It was a very deserving winner - the Iranian film, but of course everybody's heart was set to see Tanna win.

KH: Do you think they'll be taking that heart or are they really proud of what the film has achieved already?

DM: They're hugely proud, you should have heard the applause when Dain and Wawa -  the two lead characters in the movie, when they took the stage there was a really heartfelt outpouring of applause and it's clear that the people of Tanna are immensely proud of their achievements.

KH: And is there anything you can say about the importance of this for Vanuatu in terms of their culture being shown to the world?

DM: Well I think the main thing, from the highest level, anything that promotes Vanuatu as a destination is, of course, a much greater contribution to an economy that has been struggling and is really in a rather perilous state and has been since Cyclone Pam hit us. The other side of it is, of course, that there are some people expressing a little bit of trepidation around how do we promote our culture and preserve it at the same time? And that's something we're going to be looking at further in our news coverage and our programming in the coming days.