Mrs Jacobsen is planning to return to parliament on the island and is eyeing the premiership.

She spoke to Don Wiseman about her years as Niue's top diplomat in Wellington, which culminated in her becoming dean of the diplomatic corps. 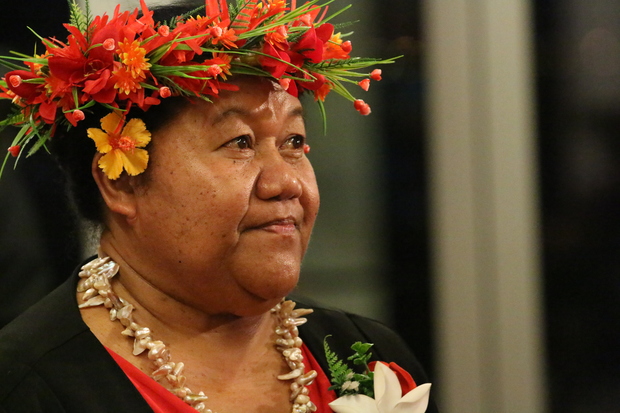 O'LOVE JACOBSEN: I have been High Commissioner for Niue here in New Zealand for six years.

O'LJ: It's a long time but it's been good to have that extended stay because you get to consolidate things that you wanted to do and to reaffirm connections

DW: The Niuean community, what state's it in in New Zealand, number I think about 25,000 now zea

O'LJ: Yes we have 25,000 people here now. That's my secondary role. I would pay attention to our folks here. See where they are at, and how they are faring in this community, given that we are two things in this country, in that we are New Zealand citizens but we are also citizens of the realm. That latter often, it is difficult to know what this means. But we as a people know that as Niueans we have a place int his country but it is a place that I have always said to our people, it is not as of automatic right. It is a place of privilege that we are here, by a relationship that was developed many, many years ago, as early as the early 1900s we were annexed to New Zealand.

O'LJ: That's probably an area worthy of visitation. We need to pick that up at some stage. I think the relationship needs to be revisited and I think there is a lot more that can be done, given that more of our people live here and very few live on the island, to the tune of less than 2,000 people.

DW: So when you say more can be done you are looking at what?

O'LJ: Well we have a constitutional arrangement with New Zealand and at this point in time I am not entirely sure how New Zealand views that relationship. Whether we are merely an obligation or a liability - who's to know. It is often a very good question to perhaps visit at the very first instance, just to see how does New Zealand feel about us as a people and as people who are New Zealand citizens but living extramural of New Zealand. And we need to know how they feel because, for us, because we have two homes we fight with our relations in the island over land, we get up and come to our second home. We get a bit cold at this end we get up and go back to the island. So you see for Niue we see it as a place of privilege and we come. So they don't really look at it in that depth but I think as leaders we should look at it. We have constitutional obligations which I think haven't been visited for a while. And there is a lovely clause in our constitution that says New Zealand shall provide the necessary economic assistance to Niue. I guess the operative word Don is necessary, and what does New Zealand deem necessary for Niue? And how do we see that as Niueans ourselves? I guess  for me personally if I was to interpret that it would be the very basic core things of education, health and infrastructure, because under infrastructure will cover all your communications, your modern communications, so we haven't quite sorted that side of things.

DW: Although given that very long answer to my question 'Is New Zealand doing enough' I think you could have also said 'No'.

O'LJ: I am being polite.

DW: Which leads us to the next stage of your life. You are returning and you are going to go back into Parliament. The elections are coming up the middle of the year I think[in May]  and you are setting yourself for the top job.

O'LJ: I have an interest to aspire to a role of leadership in Niue because I believe that this is the best time for Niue to utlise me with the skills that I have attained in this role, the connections that I have, the networking that I have developed and the confidence to be able to go out there and meet people of that level, whereby we can talk about things that relate to Niue and I feel at this point in my life - I am now 63. If I wait another three years - too old for the show my children would say, but this is a good time for me and I think I am ready and I would like to give it the very best that I can.

DW: Very often the governments in Niue, they struggle, and I guess this is a lot to do with their lack of resources isn't it? So say you got to be running things there would you be able to do things differently to how they have been done to date.

O'LJ: I guess the first thing I would do is to basically take stock of what we have on island - I have been away for six years and things may have gone in that I am not aware of.