Lisa Allan has a strong feeling she once travelled with ancient Polynesian mariners from Rapa Nui to New Zealand.

The theatre creator is appearing next week (18-21st Feb) in the debut performance of her show, Rapanui - the Song of Stone, at the New Zealand Fringe Festival.

The strory connects New Zealand and Rapa Nui, also known as Easter island and brings to light tales of the original people of Waitaha who made the long trip from eastern Polynesia.

Lisa Allan told Sally Round it all started when she was inspired to travel to Rapa Nui last year. 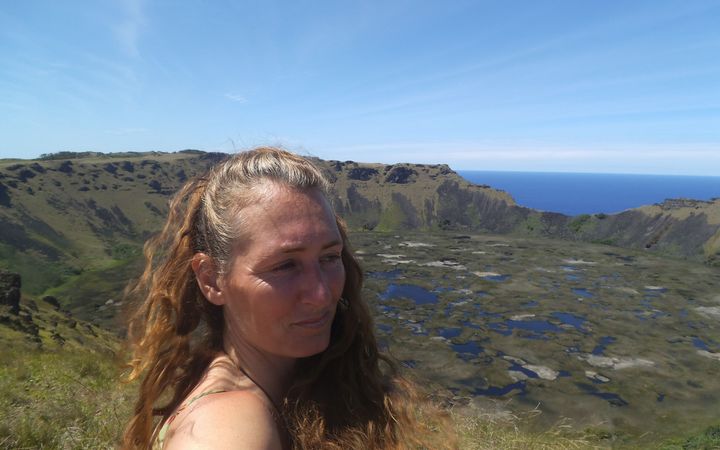 LISA ALLAN: First of all I showed up and when I told the locals I was there for five weeks nobody could believe it because usually people just come in for about five days, do the rounds and off they go so five weeks was completely unheard of. So, yeah, I arrived  and I pitched a tent in a campground and I pitched in a tent that was right next the ocean and I set about writing and exploring.

SALLY ROUND: Did you find inspiration there?

LA: I did. The story that has come through is a story that I've carried with me for a long time. The island gave me space to channel that story through in  a dramatic context. the story has two strands to it and the story is a combination of memories  and imaginings and myths and the first strand starts in the stars on a planet called Lara and it's almost a superman story, there is a child, a baby,  and the planet gets attacked and they have to flee as refugees and they come to earth. I won't give away too much. And the other strand is a bit of my story of me trying to find the place where I stand tall, the turangawaewae and those stories come together magically.

LA: Mmm. So there are two places in the world that have the name "Rapanui". We've got Easter Island (Rapa Nui) and the place in New Zealand that is Rapanui is in Christchurch and it is Shag Rock. Quite interesting. I didn't know this beforehand, it kind of all just unfolded but both of these Rapanuis have connections ot the Waitaha people of New Zealand. there were boats that sailed between the two places. the Waitaha story I feel is very important. it's one that not too many people know. I suppose in a sense the storey is a little bit contentious as well because it is asking us to have another look at our history and to acknowledge this tribe.

SR: Did you feel when you were on Rapa Nui many connections between Easter Island New Zealand, because people from Rapa Nui when they've come here have said they feel at home too.

LA: Yes definitely there's a strong connection and actually it felt like it could easily be part of New Zealand . I felt very at home there and everyone I talked to, as soon as I said I was from Aotearoa New Zealand, there eyes lit up and they said, "Ah, New Zealand, our brothers!" so there is a very strong connection. The language is very similar to Maori. A lot of the words are exactly the same.

SR: And Lisa, are you of the Waitaha iwi?

LA: I believe I can remember past lives. While I'm not of Waitaha that I know of in this lifetime through bloodline, I can remember making the trip from Easter island to New Zealand on a Waitaha waka in a past life. it's very strong, it's very vivid and it doesn't go away.

SR: What happens on that journey?

LA: What I can remember is just the long trip. What I remember most strongly is coming in and seeing land  and there are people there as if they are waiting for us, waiting on the shore. We came in and we were just welcomed completely. We'd never met these people before but they knew we were coming and it was just a sense of being of one part.

SR: So this is the real inspiration for the piece of theatre you're performing?

LA: Definitely, yes, so this is all woven into it, yeah the idea of reincarnation is quite a strong aspect.