Pacific Islands could take the Rugby Sevens from Wellington

The Pacific Islands are being tipped as a perfect Rugby Sevens host if the plug is pulled on the struggling Wellington tournament.

New Zealand Rugby has two years to run on its contract with World Rugby, but it struggled to get 10,000 people each day into Westpac Stadium.

After 18 years of Wellington playing host, there's fresh calls to take the tournament to Fiji, the home of the Rugby Sevens Olympic champions. 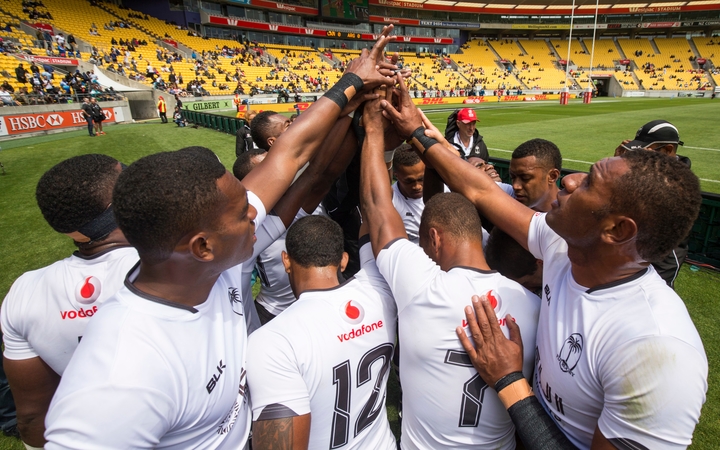 Fiji huddle up during the Wellington Sevens. Photo: PHOTOSPORT

Some say they're glad to see the demise of the event that unleashed hordes of drunken people through Wellington, while others say the fun police have killed it off with alcohol restrictions.

The NZR General Manager of Relationships, Planning and Operations Nigel Cass says the tournament has been arguably the world's most successful but it's not as fresh as it once was.

"We have tried to cater to people who want to go and party, but also along side that maybe provide opportunities for people who want to watch the rugby and those with families. But clearly, that hasn't met the market, you know we haven't achieved the crowds that we wanted to achieve.'

Nigel Cass says nothing is ruled in or ruled out, and the review will start to look at a different venue.

While Dunedin Mayor Dave Cull put in a pitch to host the event, Mr Cass says World Rugby would be concerned about choosing an iconic city to match other hosts on the circuit like Dubai, Las Vegas and Hong Kong.

But if NZR was to end the relationship, there's others nearby who are ready to take the ball, and run.

That's the Fiji Sevens Rugby team, singing after their loss to South Africa in Wellington.

The Olympic champions have longed for years to host their own tournament.

Former New Zealand sevens coach and new coach of Samoa, Gordon Tietjens, says now's the time to take it to the islands.

"Would be a great tournament in Apia in Samoa. When we saw the success of the All Black fifteen a side game when they played Manu Samoa just last year. And of course if a Sevens tournament went to Apia it would be a sell-out, if it went to Fiji it would also be a sell-out."

The CEO of Fiji's Port Denarau Marina in Nadi, Nigel Skeggs, says it's been a long-term vision to build a 20,000 capacity stadium at the famous tourist hub but talks with landowners have been stalled.

He says the logistics need to be worked out well, but Fiji is ready for it.

"There's always tlak of Fiji being involved in the Super 15. We've got other international tournaments that we'd be interested in as well. So it's all about developing the sport in Fiji and being recognised that Fiji is the world champions and the Olympic champions and that I think that we deserve a shot to host an event such as this."

But in 2014 World Rugby thought it was too soon, knocking back a bid from the Fiji Rugby Union to play host in the 2015/16 season.

The President of the Fiji Hotels and Tourism Association Dixon Seeto says when Fiji hosted a Super Rugby game last year in Suva, at the 19,000 capacity ANZ stadium, accommodation was a problem, with some players and fans having to travel some distance to the game.

Mr Seeto says if the stadium can be built in Nadi, the timing of the Wellington Sevens tournament suits Fiji well and could help it's off-peak tourism season.

"What we are trying to do in the tourism side is to encourage more traffic during the trough part of the season and this would help in that respect. so as we schedule sporting events we would schedule them during the weaker months because you don't want pressure on accommodation in the peak."

Dixon Seeto says he used to attend the event in Wellington, and although it's a pity it's on the way out, it only makes a stronger case for Fiji to take it on.

This is Alex Perrottet.