'Tanna is our film' - Vanuatu chiefs on Tanna island

A co-director of the Academy Award-nominated film, Tanna, says the film's first screening in a cyclone-devastated Vanuatu village was his proudest moment.

The entire cast of the film, which was shot on the southern Vanuatu island of Tanna, were locals from the Yakel tribe who had never seen, let alone acted in, a feature film.

The Romeo and Juliet-style love story about a young couple caught up in a tribal war and traditional customs is among the five nominations for best foreign language film at this year's Oscars.

But Mr Dean told Koroi Hawkins bringing the film back to the Yakel in 2015 after cyclone Pam, via two bedsheets strung up under one of the last banyan trees, was a very special moment. 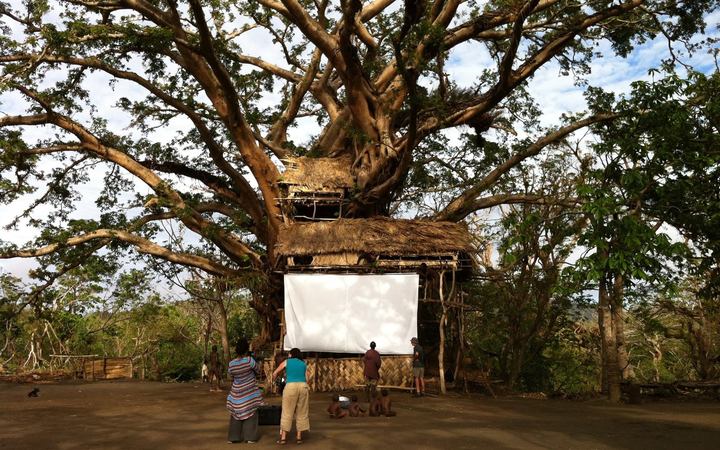 The cinema screen (2 sheets we'd brought attached to a giant banyan tree that somehow survived Cyclone Pam) constructed by the 'can do mob' of Yakel village, just weeks after the cyclone. Incredibly they insisted we come back to show the film as planned. - Contact Films Photo: Courtesy of Contact Films

BENTLEY DEAN: It was one of those magic moments I think as a filmmaker where you know here is, for most of them they had no cinema going experience right and it is a story, their story in their own language and they just loved it. It was not like a normal cinema going experience that is for sure because people would you know laugh and shout at the screen in recognition and you know sing a long with the songs etc and the very next day we got a very, a formal review from the chiefs of the film. They actually said that we understand that you came here with your idea and your equipment to make the film, but we just want to inform you that we consider this our film. And for us that was what it was all about, you know we can't have achieved, you know it is nice to have an academy award, the nomination but for us them saying that was the, that was the real reward.

KOROI HAWKINS: Have you managed to contact any of the cast and explain the significance of this nomination and what were their thoughts on it?

BD: I got hold of Lingai and he was our host in the village in the hamlet that we were staying in and he plays the part of the father and I called him yesterday morning as soon as we found out and just before he was going out into the garden. And it was actually quite difficult to get across the significance of what an academy award is. Because for them it is not particularly important I guess, but did try and tell him that according to some people that it is one of the five best foreign language films in the world this year. And I think he sort of got it and he got quite excited and I think he got more excited with the prospect of actually going to Los Angeles and being there for the ceremony. So they are stoked, I mean they are really proud of the film always have been I think this is just more vindication that oh yes we made, we made a good film.