Frank Prendergast, whose official duties ended yesterday took charge of the Royal Solomon Islands Police Force in 2014, a tumultuous year for policing with massive floods in April and national elections in November.

Mr Prendergast says he took charge of a well trained police force that was hampered by a lack of unity at the executive level which he says was partly a result of it not having had a official police commissioner for 17 months prior to his arrival.

He spoke with Koroi Hawkins about his tenure. 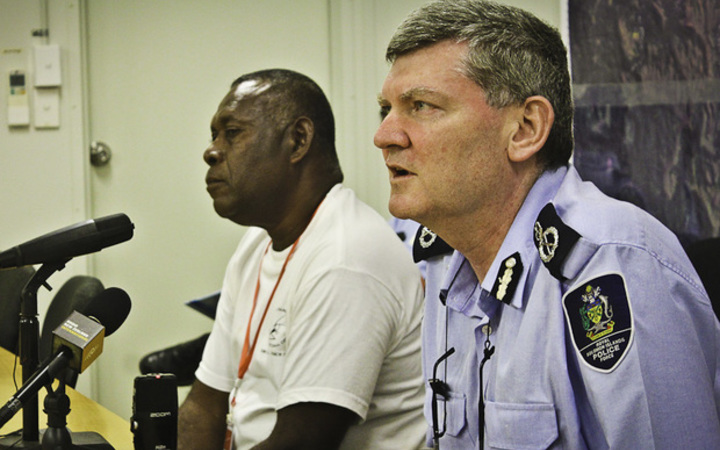 FRANK PRENDERGAST: If I have been able to do one thing while I have been here it is bring a team ethic and a team ethos to the management group of the RSIPF. But together I think we have managed some pretty major operational requirements but we have also been able to really properly articulate the future strategic direction and operating model of the police force. And I think through major initiatives such as the crime prevention strategy. Actually start rebuilding the trust and confidence of the Solomon Islands community in the police force. And that is becoming increasingly apparent that people in Solomon Islands want the police force to succeed. They want to support the police force, you know I think one of the things when I look back on over my time here with the way the community support developed and is continuing to grow for the police force.

KOROI HAWKINS: There is a lot ahead for the RSIPF, RAMSI [ Regional Assistance Mission to Solomon Islands.] leaves this year, limited rearmament, how is the future looking under the new commissioner?

FP: I think the future is pretty bright to be honest. They key building blocks are in place the new commissioner, commissioner Matthew Varley is a very experienced and well qualified police officer. He has got quite an extensive background in crime prevention and community policing as well as senior leadership experience so I think he is the right person to take the police force forward in its next phase. But with the program work outlined with the crime prevention strategy the capability plan the work that has already been done inconjunction with RAMSI and other stakeholders to get ready for RAMSI departure. The police force is in a good place and I think if the support from the community continues and you know the support from government continues in the form of the appropriate level of resourcing. I am very optimistic about the future.

KH: And that is really a key factor, you mention resourcing because one of the things RAMSI has been able to provide over the years is the backing the financial backing and logistics and vehicles and the like. Maintaining all of this equipment that has been left behind, how do you see that going is the Solomon Islands government up to the task?

FP: I believe they are, in 2015 we conducted a cost of policing study which really looked at - you know given that everyone knew that RAMSI was leaving in 2017 - what were the funding requirements for the RSIPF not only today but going forward and what sort of level of support did the Solomon Islands government need to be providing to the police. And that study which was quite comprehensive was presented to government for government to endorse at cabinet level. So what they have effectively agreed to do is continue to provide additional resourcing to the police force out to 2020 to bring the police force back into line with more of the norm in the Pacific. The first sign of that increased support was in the 2016 budget where police recieved a 19 percent increase in the budget. This year some of the issues around budget are being sorted out but there is still a commitment from government to further increase police budgets and I think a recognition not only through the cost of policing report but also through the cabinet endorsed capability plan that the police force will require additional resourcing as we move into the future. Not only because of RAMSI leaving although that is a factor, but also because like everywhere else the policing environment is becoming more and more complex. But if you think about it we have had to increase budgets we have brought in over the last two years, 238 new recruits into the police force which is a significant increase for a police force our size. So I think there is not only rhetoric around commitment to increasing resources there is actually actions occurring to back up that rhetoric.

KH: A little bit more about the new commissioner Matthew Varley, he is coming in from a position as assistant commissioner of the AFP [Australian Federal Police] is that right?

FP: That is correct he is a serving AFP officer who has taken up this position on leave of absence. He is as I said a very well qualified experienced police officer. He has had service both with the New South Wales police and the Australian Federal Police. A very extensive career includingg international service and I think he is a very very well qualified person. I have worked with him for a number of years and I couldn't be happier with the choice and I really do think as I have seen in our handover which has been going on for the last couple of weeks he is really the right person to take the police force forward.

KH: You mention chosen the other thing I saw, reports in local media were unclear as to how he was appointed?

FP: Yeah so his appointment is a matter for the government to comment on, but there has been quite an extensive process and I can say his appointment has been signed off by the police and prison service commission who are the body responsible for those appointments.

KH: Any final comments on the country and where it is heading?

FP: No I have to say I really appreciate the great support of not only the men and women in the RSIPF but also all the communities in the Solomon Islands. It has been a tremendous  experience and I leave here with a lot of optimism for the future of the Solomon Islands.