Solutions are being sought to curb the illegal, unregulated and unreported fishing by so called Vietnamese "blue boats" on remote coastal and offshore reefs in the Pacific.

The boats have been caught in several countries and territories over the past few years including Palau, the Federated States of Micronesia, Papua New Guinea, Indonesia, Australia and this week in New Caledonia.

But as Koroi Hawkins reports catching them is only part of the problem. 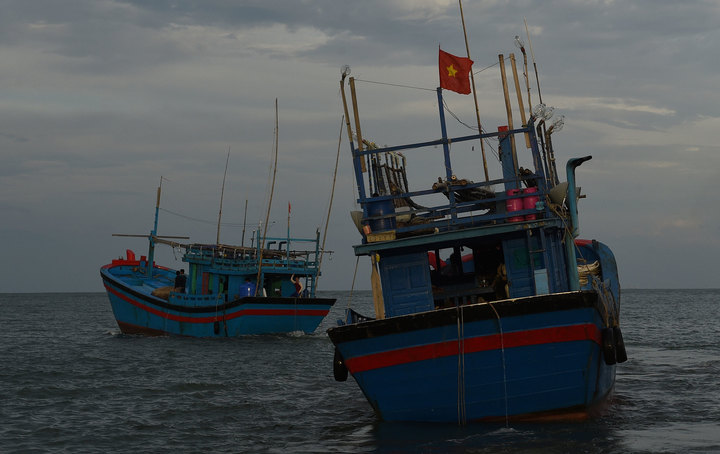 Pacific governments have blown up, burnt, sunk and confiscated these Vietnamese "blue boats" to try to send a strong message to their owners.

But a New Zealand based regional fisheries adviser Francisco Blaha says while burning the boats appeals greatly to international media it has not actually stopped them coming.

"The reality is that media campaigns are effective for those people who have access to media. My experience is that when I work in Vietnam is that a lot of those guys. They don't have access to media and not all of them are in good economic conditions."

Finding a way to stop the boats will be the subject of a regional meeting to be hosted by the Forum Fisheries Agency in the first half of this year.

The director general of the FFA, James Movick says the boats, which illegally target beche-de-mer but also take an opportunist approach to other species including clams, reef fish and shark fins, pose a double risk for Pacific countries and territories.

"It is not only the fact that they would be despoiling the reefs. But also it is in violation of national sovereignty since these reef areas which are generally within the 12 mile exclusive zone in the sovereign jurisdiction of those countries."

Mr Movick says while national fisheries are outside the mandate of the FFA he believes it is worth exploring whether the sophisticated regional surveillance and monitoring system that has been set up for the Tuna fisheries could be of some assistance.

"And it may very well be that we can't, that we don't, from the tuna side that we don't have the systems in place that would be able to cost effectively assist the island countries but at this point we are willing to encourage and facilitate that discussion and see what it is that we can do."

Once the boats are caught however a whole new set of problems arises as Papua New Guinea's assistant manager of offshore compliance Steven Klembessa quickly found out when dealing with five blue boats caught in Milne Bay Province last year.

"You know they don't have any ship's papers. They have no documentation of facts that would help link us to, you know, where they were coming from and how they were entering the country and which route they took and so forth."

And it is not only ships documentation that is of concern. Crew members often lack personal identification causing huge problems for local authorties.

In 2015 the chief of mission of the International Organisation for Migration in the Federated States of Micronesia, Stuart Simpson was asked by local authorities to assist local authorities with over 100 illegal fisherman who were stranded there for about six months before being flown home to Vietnam.

"It is a lot of strain on their resources and again that is why we stepped in and helped. They [the fishermen] are obviously what we call stranded migrants. We helped with like food, water, shelter materials and some hygiene issues, access to medicines and also things like letting them come in and use the phones to contact family members. Let their family members know they are okay."

The main solution being considered for the Pacific's blue boat problem is based on the principle of flag state responsibility, which basically means Vietnam should be held responsible for regulating its own boats.

But James Movick says this idea hit a snag when raised at the recent meeting of the Western and Central Pacific Fisheries Commission which governs the region's Tuna fisheries.

"The Vietnam government is saying, 'They, aren't ours. How do we know they are ours? They have no markings, they have no flags?' And so that becomes an issue and the question is why not? If they are in fact known from other intelligence to have originated out of ports within Vietnam."

Fisheries advisor Francisco Blaha thinks this might be achieved by imposing economic sanctions on Vietnam, placing tariffs on its seafood exports or getting the EU to issue it with one of its yellow cards signifying concern with Vietnam's lack of effort to control illegal, unreported and unregulated fishing.

"So here is a yellow card, we need to have a serious dialogue, if you don't fix this we are going to put a red card on you and that means that anything that was caught by vessels of your country will not be able to enter the European Union.

Mr Blaha says he believes this will definitely grab Vietnam's attention as it relies heavily on its fisheries exports to the European Union.

The FFA's James Movick says another line of investigation follows the belief of many Pacific fisheries experts that they are being operated by a syndicate and are transhipping their catch at sea.

Meanwhile the captain and crew of three of the blue boats which were caught in June in Papua New Guinea's Milne Bay Province are serving prison sentences for fishing without a permit, their vessels were forfeited to the state, which sold them to local island communities and their cargo mostly beche-de-mer has also been sold to recover costs.

The other two boats caught in December have been taken to Port Moresby and their captains and crew are still awaiting their fate.