Tahiti floating village to test technology for a better ocean

The creators of a floating community planned for French Polynesia hope the project will eventually lead to hundreds of new islands for people at risk from rising seas.

French Polynesia signed a deal with the US based Seasteading Institute to collaborate on the pilot project earlier this month.

The institute's Executive Director Randolph Hencken says the eventual plan is for a thousand floating cities on the ocean.

But he told Sally Round the pilot will involve just a few dozen people on platforms in the Tahiti lagoon. 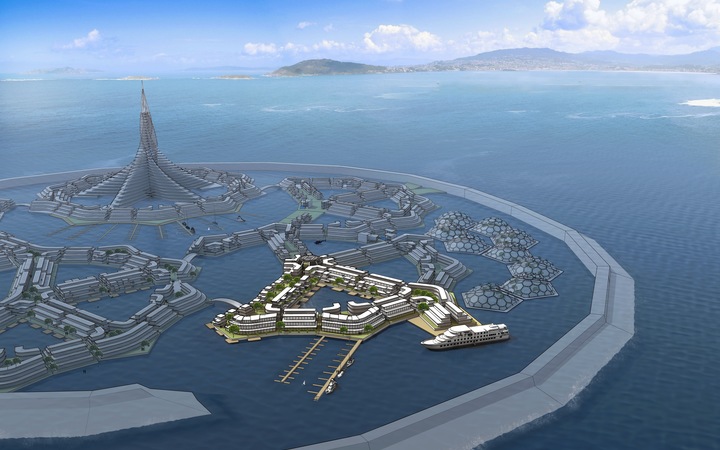 RANDOLPH HENCKEN: Our plans are to float on the water, to use non-fossil fuels for our energy. We can collect wind, wave and solar power - there's a lot of energy in those waves. And what we're trying to do with our first project down there in Tahiti with our first project is to prove this technology. This is a pilot project to prove our hypothesis, the exact location and site hasn't been determined yet, but we hope to be in the lagoon in Tahiti and we can build our floating island on the inside of a reef break and be protected from the open ocean - that makes it easier to engineer. We have a lot of great designs on our website (seasteading.org) and people should see them, but they should all take them with a grain of salt because, you know, they're artists' renditions and now the rubber is hitting the road, so to speak, it's time for us to come up with a real design we actually plan to implement there.

SALLY ROUND: I understand that French Polynesia approached you, what's in it for them?

RANDOLPH HENCKEN Yeah, that's correct. A Tahitian named Mark Collins who was the former minister of tourism and is an entrepreneur and businessman down there read about us in a magazine and reached out to us last May. We went down in September toured and presented a proposal and then started working together on the memorandum of understanding. This is a mutual co-operation. French Polynesia is looking for a resiliency plan for rising sea levels and they're looking for economic activity to keep their population engaged. Their biggest economic driver is tourism and we want to bring in technologists and other research opportunities so that the young people can be involved. It'll be a direct and indirect investment for them because we are bringing a new technology, new industry down there. We think that there will be a lot of opportunities both directly on the floating platform - the floating island - as well as helping the servicemen and the indirect benefits of us going to their restaurants and stores.

SALLY ROUND: There might be some opposition to this, what are the big fears that you have seen people expressing and how are you addressing those?

RANDOLPH HENCKEN What we have  seen is that it is reasonable for people to be wary of something that don't know, that they haven't heard about, something new, Particularly if the first time they hear about it is from their government and they think going to use their tax dollars to subsidise some foreigners' wild idea. But when we explain to the locals that we're not asking for their tax dollars and that we're going to fund this through our own investment, that we raised outside of French Polynesia - or outside of the government, that allays a lot of their fears. Unfortunately for us we have been ghettoised by media that likes to repeat a story that we are a bunch of rich people who are trying to escape and go create a Utopia, which doesn't characterise any of the people I work with who are all novel thinkers and go-getters who are excited about the opportunity to do something good for humanity. What excites me the most about this project is the technology we're going to have to use to build this floating island is interesting, but it’s really about the people. This won't be a successful project if we don't have  good community that's based on people who are choosing to come live here because they want to be a pioneer on this new frontier with us.

SALLY ROUND: How do you envisage the whole city being run? Is this, in the French Polynesia case, part of French Polynesia, or is it its own separate entity with its own laws, its own flag, that sort of thing?

RANDOLPH HENCKEN: We are certainly part of French Polynesia, that's the way sovereignty works when we are in their territorial waters. Our collaboration with them does hinge upon them creating a special governing framework opportunity for us so that we can self-administer our ski zone. But I would not imagine it will be as radical as some might imagine, but I think that it's going to be a chance for us to try things different.

SALLY ROUND: But, ultimately the idea would be to have separate city states at sea?

RANDOLPH HENCKEN: Well, this pilot project is a pilot project. It is a chance to do a proof of concept, it's going to start with just a few platforms, you know, we are going to learn a lot about the technology when we have several dozen people who are living on these floating islands and coming through and checking them out. Over time we hope to fix that we will grow and eventually outgrow the lagoon and want to live elsewhere. At the same time we hope the industry will becomes successful and we are able to extend these floating islands the millions of people who are risk from losing their homes to rising seas and we have a long-term vision of 1000 cities out on the open ocean with their own ways of conducting societies.