Call for GCF to focus on climate change refugees

The GCF last week committed to big grants for Samoa, the Cook Islands and Vanuatu.

But Su'a told Don Wiseman that the GCF and International community must be open to projects around climate change refugees and accept that a greater sense of urgency is needed. 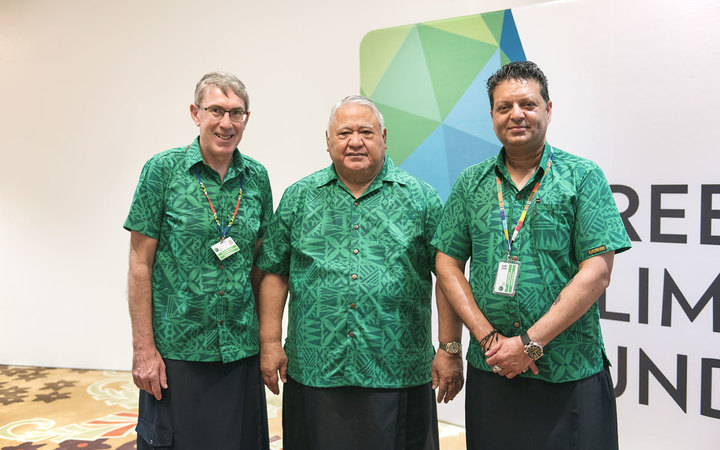 SU'A WILLIAM SIO: There is no doubt about it that the allocation at the moment is welcome but the issue for many of those Pacific Island nations, low lying - the most vulnerable in the world, is being able to access funding for projects badly needed for them to be able to survive through climate change, rising seawater levels, coastal erosions. I raise the issue of displacement because that's happening right now as outer islands become unviable and are no longer able to sustain life.

DON WISEMAN: You yourself spent a fair bit if time touring the Pacific, particularly Kiribati and Tuvalu, earlier this year, wasn't it?

DW: And you found very graphic examples, in Tuvalu, particularly, of the signs of the impact of - well what is happening in the outer islands and how that impacts on places like Funafuti.

SWS: Absolutely. What I have said in my rounds of discussions with the wider community is the islands are your canary in the tunnel of the mines of the old times. They are signalling to the rest of the world the dangers that they are now experiencing as a direct consequence of climate change and if we don't help them, we not only condemn them to having no home of their own, but it then means that we are accepting climate change will roll out to the rest of the countries of the world. I gave the example of Tuvalu where that population [on Funafuti] in the last decade has tripled as people from the outer islands migrate to the main island and putting pressure to already pressured main islands. Kiribati is another example, where, out of the 31 islands that make up Kiribati, ten of those islands are no longer habitable, and you have got squatter villages squatting on the main island of South Tarawa and of course that is putting on pressure in terms of water supply, food supply, sanitation and health services. And so those are the problems that the Green Climate Fund and the international community have to recognise and there is a sense of urgency about it all.

DW: I think on the international stage there are significant discussions that are happening to try and come up with some legal mechanism to find these people, who may or may not be refugees but as we know they are definitely climate refugees aren't they?

SWS: I understand that the Security Council is still debating the definition for what would constitute a displaced community as a result of climate change but the reality is that it's happening now. And as I said I came away with a sense of urgency that we are not doing enough,, fast enough, and I raise that with the government, I have raise it with  the wider community - I think there is a greater sense of understanding from our general public in New Zealand but at the government levels - yes there have been steps going forward but we are still a long way from recognising that these island nations - the most vulnerable, low lying, if we don not act quickly enough to save them they will not have homes to live in.