The once a week flight is important to Norfolk's tourism industry, the many New Zealand citizens who live there and the supply of critical foods to the island.

Air New Zealand, which is the only airline that services Norfolk, will maintain its flights out of Sydney and Brisbane. 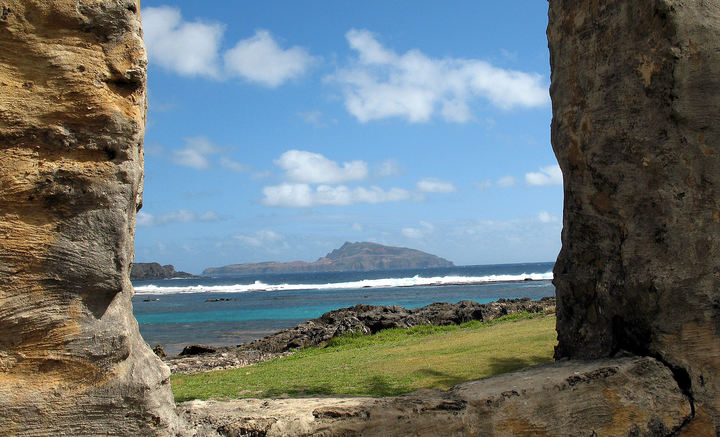 Nearby Phillip Island can be seen from the old salt house in Kingston in the Australian territory of Norfolk Island built when the place was a brutal penal colony in the early 1800s, 03 February 2007. Photo: AFP PHOTO/Lawrence BARTLETT

ROBIN ADAMS: Of course it wasn't under the banner of Air New Zealand, it was TEAL at that time, but enough to say that it has been almost 70 years that New Zealand's international carrier has been coming to Norfolk Island. We are very sad that we are losing our Auckland/Norfolk Island run at this time, however that might be how it is at the moment Don but I am staying positive and nothing and I am pleased to be able to say that the general manager networks of Air New Zealand will be coming up to the island early in the new year. I am not saying for one moment that at that point in time it is possible for that service to be returned but it will be a good opportunity to talk through the whole Air New Zealand servicing of Norfolk Island from Australia and, we hope, New Zealand in the future.

DON WISEMAN: Just how important has the New Zealand market been. It's just been one flight a week hasn't it?

RA: One flight a week yes but you see Norfolk Island has so many New Zealanders living on the island. It is their means of getting back and forwards to family and for family to visit here, but of course we have also got a large amount of food that comes in, Vogel bread, butter, all the New Zealand products that we all love here, and that is now going to be in jeopardy unless we can organise an alternative.

DW: Have you been in discussions with others?

RA: There is another operation making representation to the Commonwealth and the Council to put in place a Brisbane/Norfolk/Auckland return service on the Sunday, which would actually add to the current arrangement.

DW: The industry has been in something of a free fall hasn't it for five or six years now. Is there any sign of it being arrested?

RA: Certainly, in Australia. We have recorded 20 percent growth. We have launched a destination campaign in Australia. We now have an ambassador for Norfolk Island, Ray Martin, a well known TV personality and it is very hard to get a seat on the aircraft now out of Sydney and Brisbane, which has a compounding problem of not being able to get freight in. But that is the Australian market at the moment, so we are very pleased with our the Air New Zealand/Norfolk Island arrangement is working there. We will be talking with the Commonwealth about how to go forward. You will be aware that the Australian Government does underwrite the Air New Zealand service out of Australia to Norfolk Island and we will be having discussions with the administrator,, on behalf of the Commonwealth, and with the Air New Zealand general manager [networks] Richard Thomson, when he comes up. I am staying totally positive that we can resolve this in a speedy way.