Fiji has been told to expect more heavy rainfall, flash flooding and strong winds over the next 12 to 36 hours.

Five days of torrential rain from a tropical depression has flooded towns and wiped out newly planted crops.

The tropical storm has changed its southerly direction and is heading directly for Viti Levu.

It is also moving more quickly.

The storm has set back the recovery of the country which is still reeling from a massive cyclone in February. 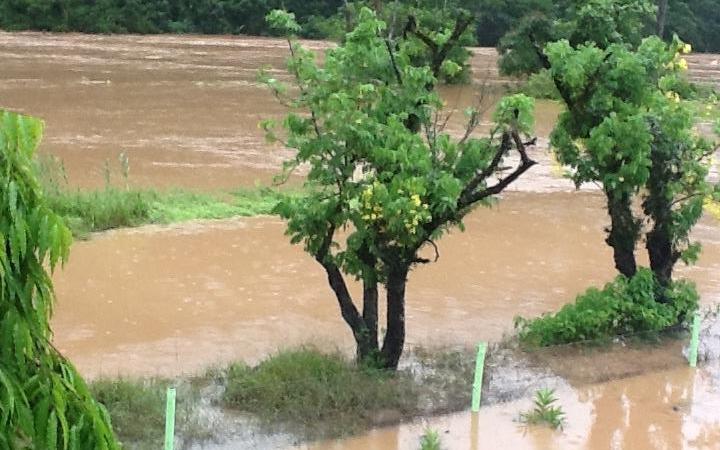 More than 300 millimetres of rain has fallen in some areas, flooding the centres of towns including Rakiraki and Ba, and forcing a hospital in Nausori to relocate for a brief time on Sunday. More than 1,000 people have sought shelter in evacuation centres, and a landslide has destroyed a school, a health centre and houses on Qamea island, in the country's north. So far, there have been no reports of casualties. The heavy rain comes at a time when the country is still reeling from the devastation wrought by Cyclone Winston ten months ago. Hundreds of Winston victims are still living in tents, and the director of the Fiji Red Cross, Filipe Nainoca, says the flooding will almost certainly set back the recovery.

"The areas that have already recovered and then now have to face the flooding, of course the recovery process will be affected. But we don't know how much or the total impact because of course it's still raining at the moment."

Crops replanted after the cyclone have only started to grow, but now several farms have been wiped out again. The general secretary of the National Farmers' Union, Mahendra Chaudhry, says the flooding is devastating for an already struggling agricultural sector.

"Well of course lost incomes and there will be a shortage of vegetables and fruits and things like that, and of course because of that shortage the prices will be quite high. So it's going to be quite a struggle for them and people are still living in tents. It's not going to be a very good Christmas and New Year for them, I'm afraid."

Mahendra Chaudhry says many farmers are likely to need substantial assistance from the government. The director of the disaster management office, Akapusi Tuifagalele, says that as river levels slowly recede and cleanup crews are able to get out, normality should start to resume. However, with rain still forecast for the next few days, he says people should remain vigilant.

"We are not out of the woods yet. We are slowly moving back to normalcy, but the operation still goes on and it's going to take a few days. We would expect today, or tomorrow, when the water clears for officials to go out and do their damage assessment, especially for agriculture and infrastructure like roads, and they can come back with estimated costs of damages."

Mr Tuifagalele says it is still too early to tell what the cost of the flooding will be.