Solomons police standing by to rearm on govt's approval

The police in Solomon Islands say they're ready to rearm as soon as the government gives them the green light.

The police have been without firearms since 2003, when an Australian-led intervention force entered the country to end a long period of civil unrest.

Since then, the police have relied on the regional assistance mission, or RAMSI, to provide armed support when needed.

But with the mission scheduled to leave at the end of June, the police force will have to resume those responsibilities itself.

That remains controversial, as some fear a repeat of the ethnic crisis where police weapons fell into the hands of militants.

But the police commissioner, Frank Prendergast told Koroi Hawkins it is a different time and the police force has been completely rebuilt. 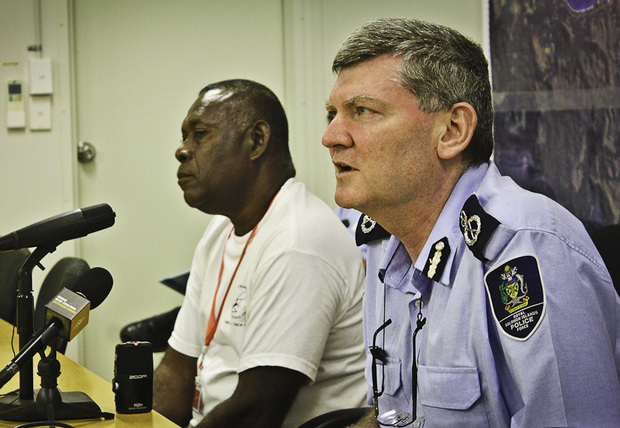 FP: The history of the RSIPF is that we had issues during the tension, the police armouries were raided those weapons from the armouries  went into the community and there has been a big effort to collect those weapons up and there has been a major sort of reconstruction of the police force, if you like, since that time with the assistance of RAMSI to ensure that the police force is ready for withdrawal of RAMSI. One of the key pieces of capability that is still to be implemented is rearming the police. There has clearly been a lot of community concern in relation to rearming the police. We have gone for a very, very extensive community engagement program explaining the need for rearmament, explaining the steps that have been taken to ensure rearmament is done appropriately and also talking to the communities about the police and the development growth that the increased capability of the police force over the last 14 years. So that engagement has been going on for a good few years. The feedback from the community is overwhelmingly supporting rearmament now with the appropriate safeguards. We have gone through a very detailed program inside the police force identifying the units to be rearmed identifying the appropriate types of weapons. Putting in place the governance putting in place the training, putting in place all the safeguards that are required. We have also been through a process of developing the appropriate infrastructure including the armoury which is now a state of the art facility. So a lot of work has been done, the community is aware of that work. They support rearmament now the government has the final tick off obviously and that is the process we are going through now.

KH: Right and I was saying once RAMSI, once you do get that approval what is RAMSI's approval going to be going forward?

FP: In much the same way as they have been assisting us with capacity development and in other areas they will work with us to strengthen and monitor the RSIPF systems so if there are any issues identified in terms of how we are set up to manage the weapons that they can be dealt with RAMSI's assistance while RAMSI is here. So it just makes good sense I think it also gives the community an added assurance while they are getting used to the fact that if the government does give permission if the police force is rearmed that RAMSI is here with us and given the community confidence that RAMSI is still working with the police on these issues. So I think in terms of rearmament we are in pretty good shape it was a very extensive process to prepare to get to this point. I am confident now as commissioner and I have got to say the rearmament oversight committee which involves the RAMSI special co-ordinator the permanent secretary for the Ministry of Police National Security and Correctional Services have all endorsed rearmament, that we are ready. So now it is a matter for cabinet to consider, as they should, and then they will make a decision in due course and then we will abide by that decision whichever way it goes.

KH: I understand from the consultations that you carried out one of the only or one of the major reservations that was recurring amongst community members is that they were worried, fearful of a repeat of what happened during the tensions and what is your guarantee that that won't happen? As in the armouries being broken into and guns ending up in the wrong hands and being used for different purposes.

FP: Well I think the first thing I would point out, the way the police force will be armed in the future provided government endorse that is quite different from the way it was prior to the tensions. So prior to the tensions it had a lot of weapons that had automatic rifles it had even some machine guns. So it had quite a bit of weaponry which in the normal course of events could be construed as military weapons. So we are not talking about that type of rearmament. We are talking about very limited rearmament of particular areas of the police force, our police response team and the close personal protection team. The weapons we are talking about are a limited number of pistols the same sort you would see on the street that police are using in Sydney or Auckland or New York. They are very much police weapons. We are talking about some shotguns which are needed for specific tactical purposes. And we are talking about a very small number of rifles which in the main are to be used for crocodile destruction which is a function we will need to take over from RAMSI. The police force itself is different it has been totally rebuilt. The culture of the police force is different. The units that we are rearming in the police force itself have been built with ensuring that we have got the appropriate ethnic mix in place so you know representatives of all provinces of the Solomon Islands. We have increased our representation of women police officers and indeed on our last recruit course 50 percent of the recruits out of 70 are women and then there has been a lot of work as I said over the last 14 years on culture and discipline and all those issues. In conjunction to that, there has also been enormous effort put into the facilities themselves. The armoury is state of the art it has not only got physical security it has got biometric security it has got electronic surveillance it is a different facility from the one we had previously. And clearly there has been a lot of work done with the leadership of the police force and I am pleased to say with the police executive now it is a very united team it is a very strong team and one that I am very confident of their values and commitment. So it is a different, time things have changed and I think we are well and truly ready to rearm or else I wouldn't have given that advice to government.