An eleven year old girl who died when a building collapsed on her is the first confirmed victim of the recent earthquakes in Solomon Islands.

Disaster authorities in the country are only now beginning to reach affected communities in isolated parts of the Guadalcanal, Malaita and Makira and Ulawa Provinces.

The girl who died on Guadalcanal is the only reported casualty so far although at least 7000 people are believed to have been affected by the quakes with more than 200 buildings damaged or destroyed, including 11 schools and a health clinic.

The 7.8 magnitude quake struck off Makira Island in the early hours of Friday morning generating a small tsunami which also damaged several buildings.

There have been multiple aftershocks since the big quake including a 6.9 earthquake on Saturday morning which local NGOs said rattled the nerves of already shaken. communities. 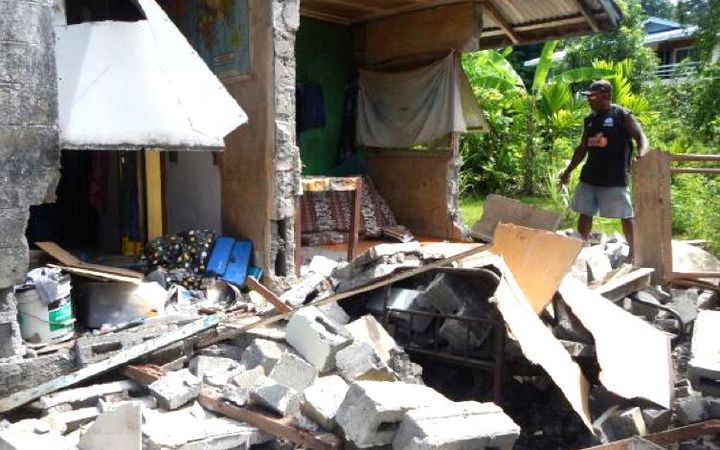 LOTI YATES: Well for Makira the patrol boat [is] currently doing the initial response by way of getting initial information lo [of] damage and also small emergency relief that is currently being undertaken in Makira Province. At the same time in the Southern part of Malaita the provincial emergency response team are also doing the similar work basing out of Afeo sub-station and then co-ordinating out to the impacted communities. Of the southern island of Malaita.

KOROI HAWKINS: And there is some damage on Guadalcanal as well I heard?

KH:The last figures we managed to get from secondary sources was about seven-thousand people affected across three provinces with about two-hundred houses damaged or destroyed. Is that still the current status?

LY: Yes that is correct there is an updated situation report that is going to come out later on in the afternoon today and at that time we should have a clear picture of what the damages are. But as far as I know it would be mostly infrastructure, community houses or dwelling houses etc in the villages.

KH: Right and still with your teams out there now no reports of injuries or casualties yet?

LY: I think as of yesterday there was one reported death. An eleven-year-old girl as a result of a collapsed building on Guadalcanal Province yes.

KH: Right I am very sorry to hear that. And in terms of still on that injuries, I would assume there would be more reports of injuries as well?

KH: Right are you concerned with it being closer to the wet season and the cyclone season?

LY: That is actually the biggest worry that we have. The fact that we are now in the rainy season, the more water that is absorbed into the ground that is already loose from the shocks will generate landslides. It is not only that a lot of our people has also lost their homes. We cannot allow them to live in tarpaulins for a long time. Tarpaulins are supposed to be just temporary in the communities that were badly affected.