Prepared this way rather than filtered, kava was more active in inhibiting  the growth of breast and colon cancer cells.

One of the principal scientists behind the study, Linda Saxe Einbond from the New York Botanical Garden and the City University of New York, told Johnny Blades the results are encouraging. 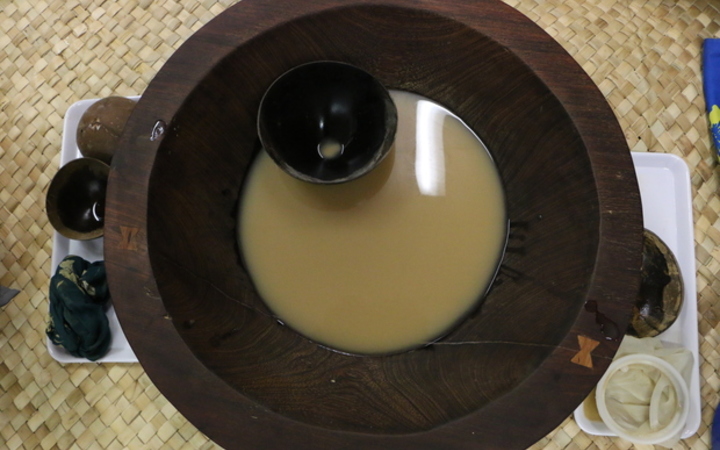 A tanoa (kava bowls) with a bilo (kava cup). Normally the lowliest person would serve kava to the circle. Photo: RNZI/Daniela Maoate-Cox

LINDA SAXE EINBOND: Right so we prepared kava the way it is prepared traditionally and some water extract high in particular content and we did it, we prepared it alone and we combined it with hibiscus. Since it is squeezed or strained through hibiscus bark in traditional preparations. And we found quite interestingly that the less we did to it the unfiltered preparation was more active than the filtered. But what people actually drink, the drink has particles in it. It is more active than the next step of filtering it or purifying it.

JB: So do you think it is something that needs to be looked into more? Is it going to be developed these sort of analyses?

LSE: I mean I would like to fractionate what we were working with and see just where the activity goes and see what components are responsible. And also to combine it with other preparations and see where it could help other drugs or herbals.

JB: Significant findings in terms of the kava from Fiji...

LSE: Right yeah, that was the strongest. We are not quite sure why the kava from Hawaii was not as active but I put some ideas in the paper. One it didn't look as fresh the package had been opened and it could be that the active components the kava lactones where degraded they are not very stable. But also in the profile in the item did an analysis a biochemical analysis of the component and there was less flavokavain B in the Fiji, in the Hawaiian than in the Fijian and it did correlate with activity it seemed that the higher the level of that the more activity and so that is one thing I would like to look at.