Samoan boxer Joseph Parker will be the first New Zealand fighter to contend for the WBO world heavyweight boxing title this saturday.

In New Zealand's first ever hosting of the world heavyweight championship bout, Joseph Parker will fight Mexican Andy Ruiz for the title at Auckland's Vector Arena.

Twenty-seven year old Ruiz is unbeaten in 29 fights with 19 knockouts.

While the 24 year old Parker, has fought 21 times with 18 knockouts. 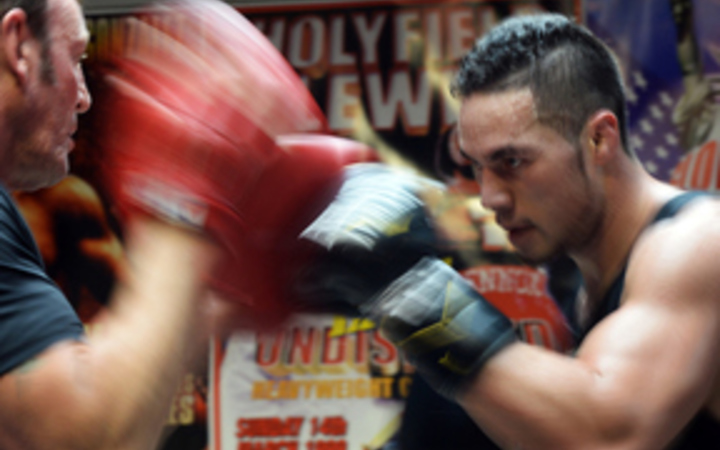 It's the second time a South Auckland boxer has contested a heavyweight world title, this time for a different boxing federation. While David Tua remains a legend in this community, it's no surprise that locals at this Zumba class in Mangere's town centre are overflowing with excitement in the lead up to Joseph Parker's fight this weekend. Local Maori Warden Georgina Tahana says she can't wait for the fight.

Many in this community share similar predictions for the fight.

"I'd love to see him knock that guy out, so yeah, knock out! probably round eight! Yeah! so hoping that he will come out on the top and there will be more championship fights in Auckland!

"Yes, he is good looking and I know he's going to win for sure - Deborah

Joseph's mother Sala says her son's journey is evidence of the old proverb 'It takes a village to raise a child'.

"This is everybody's contribution in their growing up. Everybody supporting them, cheering them up. So it's, it takes a whole world if not a community to raise these boys and I'm so grateful for the support out there."

Both his mother Sala and his father Dempsey say they have butterflies, but are looking forward to the fight.They jokingly call themselves the 'Heavy Security team' for both Joseph and his younger brother John who is also set to contend in the opening fight on Saturday's card. At the Pullman hotel their room sits directly opposite the rooms of both their sons Joseph and John Parker where Sala keeps a watchful eye. She wants to make sure both boys are focussed and in bed on time.

"Wherever he fights we have to travel to ensure that he's prepared himself well and also to support. I guess that's the main focus. What we've experienced so far is they needed to see our face, that we're there for them. And that's another huge motivation for the boys."

The parents have played a huge part in Joseph's career. Two years ago Sala Parker resigned from her job as a Social Worker to help support Joseph in his career. Dempsey says since they first started fighting, he has actively taken part in their training.

"Took them to run on the road while I follow them with the car. Well, just to guard them from the dogs.

So he had to follow in a vehicle with his long stick and once they see the dogs they will just stop the car, get out with the stick and chase them away and get back into the vehicle again and off they run."

He says nutrition has always been key.

"From amateur I have to boil this much eggs in the pot because I was thinking of giving them a lot of protein. But there was no protein powder for them so I have to cook every morning."

While this week has brought a busy schedule for the family, Dempsey says cooking for his boys remains his focus.

"Boil chicken, no fats. We make sure everything is right this week. We cook from home and bring it to the hotel. Yeah, so every morning he goes off to work and he will finish work, go home and cook for the boys and bring it here."

Early in Joseph's career an agreement was made with his trainer Kevin Barry that Joseph would only train or fight between Monday and Saturday. Whatever the outcome of Saturday's title fight, the next day will be like all Sundays for the Parker family with Sala and Dempsey adding that they will go home as a family and pray and thank God. They have have two words of advice for both their sons.

"Concentrate. Discipline. You know, after doing all the things that I'm supposed to do like fasting and praying, then I feel good. And leave the rest to the heavenly father."

From his hometown in South Auckland, the support remains strong.