Mr Crepeau, who has just finished his first official visit to Australia, also visited the regional processing centre on Nauru.

He told Don Wiseman that despite the millions spent by Australia on housing hundreds of people on Nauru the camps should be shut down immediately. 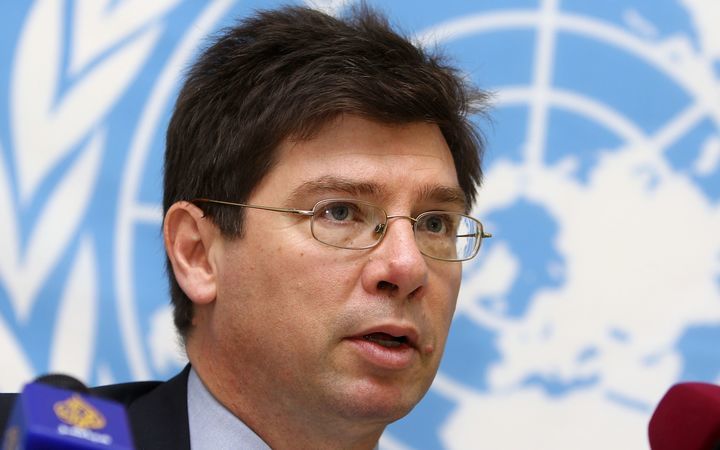 The United Nations Special Rapporteur on the human rights, Francois Crepeau attends a press conference in Doha in 2013 Photo: AFP

FRANCOIS CREPEAU: For most of those refugees and asylum seekers there's no future in Nauru, it's a transitory situation, this is acknowledged by the Nauruans and by the Australian authorities. There's no future and at the moment it's very difficult for the refugees to imagine a future, going to school is actually difficult, there are clashes between communities at school, the children of the refugees are not very happy to go to school, many do not go to school after a few years because of that. Integration in the community has also proved quite difficult, integrating is not easy. I'm told that 40 percent of the refugees have found jobs in the community but these are not jobs that have prospects of developing over the future. These are often odd jobs or they've created small businesses like restaurants. So the idea is that it is transitory and many of them have been really affected in their physical and mental health by the uncertainty about the future, by the incapacity to play their role as parents in creating a future for their children. Many of the parents are completely depressed by the fact that their children are stagnating and this damage done to their mental health and their physical health will not allow them to create a great future for themselves. Many of the refugees and asylum seekers are on daily diets of sleeping pills and happy pills and so it is grim at present. If there is a real hope in the community that there will be resettlement in a country like the United States, I think for many of the refugees who are on Nauru this will be a breath of fresh air and they'll be preparing for this transfer.

DON WISEMAN: Australia of course is saying that those people will still never be allowed to re-enter or enter Australia. Should that be allowed to stand in your view?

FC: I don't see the point of that, it doesn't help anything in terms of the future of these refugees. If they're resettled in the United States and they become leading brain surgeons, why shouldn't they come do conferences in Australia and help the Australian brain surgeon community do what they do better? I don't see the point of that punitive approach, it doesn't help anything, it won't change the lives of people, it will just deprive Australia of the benefit of people who would be successfully resettled elsewhere.

DW: It's sort of been beyond grim for many of them hasn't it, there have been many many reports of abuse

FC: Well there were many reports of abuse indeed. There were many reports of sexual abuse in particular against women and girls, I haven't observed anything myself, as you can imagine  but this has been reported and the follow up of complaints that have been made were not satisfactory, at least not in the evaluation of the refugees themselves, this has for example prevented women and girls from actually going out in the community. Many of them are staying inside the RPCs [Regional Processing Centres] for fear of going out, so yes, you hear of abuse and you hear of abuse, verbal abuse, and accusations made against refugees which are unfounded but there seems to be little remedy or real investigation in those allegations of abuse, to check whether they are true or not. So yes it's a difficult relationship between the refugees and the community.

FC: Well the word I've used is blemished which is probably less strong than tarnished I think Australia has a great history of migration, has a great tradition of migration, has great policies of migration, hundreds of thousands of people come every year as permanent residents or temporary workers and will have a pathway to citizenship at one point and the population of Australia will be growing tremendously thanks to this migration. So Australia must be doing something right. B ut no country is immune to human rights violation and every country has a blind spot somewhere and I think this is one of the blindspots of Australia. Certainly it's one blindspot in the sense that the reaction to the arrival of asylum seekers and refugees has been punitive and has not brought a solution to what the refugees and asylum seekers were looking for. What is I think interesting in the development about an agreement with the United States is that I think the discussions at international level are becoming much more sophisticated and Australia can play a leading role in such discussions. I could see in the coming years regional agreements on how to deal with crises, such as the Andamanese crisis last year or the arrival of Syrians and Iraqis in the past few years. A much better solution which would provide interim, short term interim solutions that are satisfactory and that would provide long term settlement and or settlement in Australia, in Indonesia, or Malaysia or other resettlement countries I think all countries have to get together to find long term solutions that are not politically taxing, as has been the case in recent years, are acceptable to the populations, because it is governed, it is regulated and if states offer those mobility solutions to refugees, asylum seekers, migrants, and take over the mobility market from the smugglers I think the populations will accept that. The population are often less afraid of the migrants than of the absence of documentation of the migrants and so presenting a much more orderly mechanism for bringing refugees, asylum seekers, offering them short term temporary solutions and long term resettlement to me is the best solution.

DW: What do you want to have happen to these camps on Manus Island and on Nauru?

FC: They need to close and quickly, period. Australia could be a leader in engineering at a regional level or a global level solutions that are much more creative, much less punitive in terms of helping people resettle and change the discourse about these migrants into a positive one, that they're a benefit for the community, that these people have grit, they've been through so much and they will thrive in any environment that allows them to thrive, and if we can have solutions that allow us to present that to the populations I think the resistance to welcoming refugees and asylum seekers will wane and people will see the advantage of multiculturalism and openness as long as it's regulated.