A three day conference in Papua New Guinea this week aims to activate a government plan to overcome sorcery-related violence.

The conference run by the Constitutional and Law Reform Commission comes after the creation last year of the Sorcery National Action Plan, or the SNAP.

The commission said the forum would provide valuable insights to help it and the SNAP to develop appropriate policies and legal frameworks to address the violence. 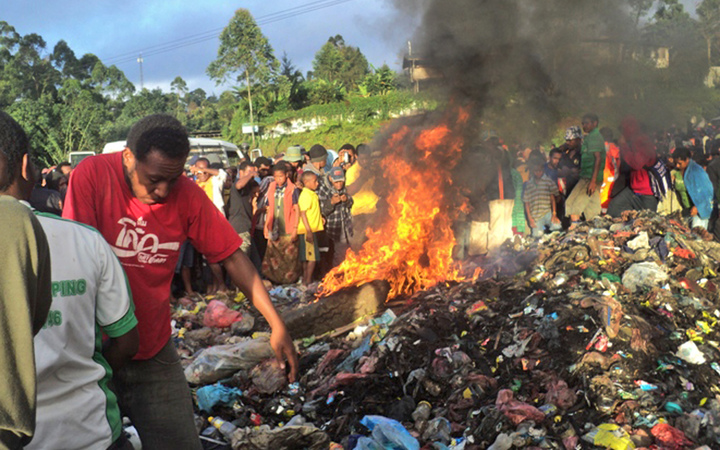 A photo taken on February 6, 2013 shows a crowd watching as a young mother accused of sorcery, is stripped naked, reportedly tortured with a branding iron, tied up, splashed with fuel and set alight on a pile of rubbish topped with car tyres, in Mount Hagen city in the Western Highlands of Papua New Guinea. Photo: AFP / Post Courier

FATHER PHILIP GIBBS: One is counselling and communication; another one is education, awareness; another one is health issues, if you can reduce the number of unexpected deaths than you are going to reduce the number of accusations hopefully; and then the next one is law and order issues; and then the fifth one is research, trying to figure out what is actually happening.  So that is how comprehensive the plan is, trying to come at this phenomenon from various points in order to be able to get into a better space than we are at now.

DON WISEMAN:  So it's going to involve the churches but who else will be involved?

DW:  There has been a lot of discussion going back quite a long time now, trying to curb sorcery-related violence.  Do you think there has actually been any impact from that?

FPG:  It's difficult.  I think there have been areas where there has been an improvement and there are other areas where it is becoming more difficult.  I will give you an example of each.  There are communities that have got together and decided, 'we don't want to have it anymore' and so they have passed local laws amongst themselves that no one can accuse another one of sorcery and witchcraft.  Where it is happening, they're trying to stop it at the accusation level so you get a spot fine for instance if you accuse someone else.  That seems to have an impact in the few areas where they have tried that and that's a positive but in other areas, it is moving into areas where there has not been a history of sorcery and witchcraft.  For instance, the Enga province in the Highlands, where they didn't believe in that sort of thing and now all that belief is coming in.  It is a bit like a virus coming into an area which doesn't have a resistance to a virus.  It just goes through like bushfire and that's what happening in some places which have no real cultural mechanisms to deal with that.  It is going through like a virus going through and they are going to have to find ways to deal with it at the social level, cultural level, belief level and so on because this is something new for them.  That is where the main accusations and the violence is coming out at the moment.

DW:  So SNAP, you laid out a comprehensive line of things that you would like to look at, but it's expensive.  What chance is there of getting the funding you need, given all the other financial constraints on the government these days?

FPG:  Yea there are huge constraints on the government of Papua New Guinea these days and I think we can't just rely on what they are planning so we are trying to look at other sources of funding.  For instance with research we are looking at other agencies, church agencies, other agencies like UNICEF or UN agencies that might be able to contribute some sort of funding.  We have to look at good will in many cases.  People just prepared to do awareness for instance, they don't need to be paid for it but if they can be given support to be able to contribute and improve things.  For example, we try to get across in training to health personnel that they should be wary in saying to people that it is a traditional problem, because people immediately think that it is sorcery. Try and come up with a modern, scientific diagnosis of what the problem is, putting the effort into that.  We have to look at all the possibilities that don't rely necessarily on funding, but to try and find funding from other sources.