Governments from about ten Pacific countries have helped to put together a guidebook on human rights reporting.

The book, once published, will be used as a tool to help individual countries in the region report back to international bodies on how they're measuring up to the treaties they've signed up to. 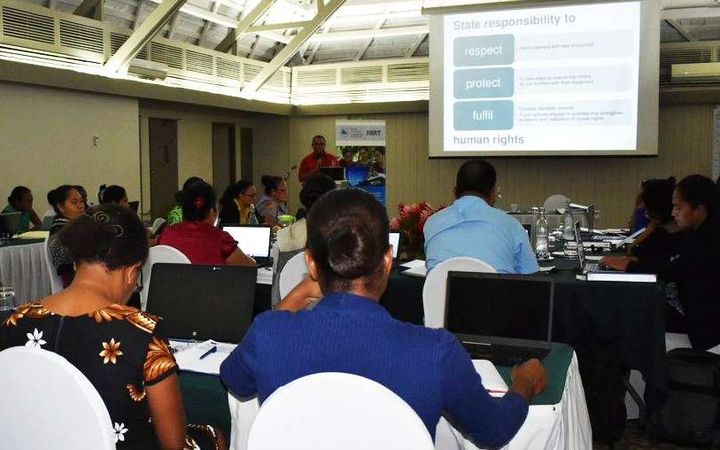 A guidebook designed to help Pacific governments report on human rights being finalised at consultations in Fiji Photo: Pacific Community

ROMULO NAYACALEVU: One of the challenges to treaty reporting, that we've identified in the Pacific, is the lack of tools for our governments to be able to use to assist them. And therefore, through this project, we've identified that one of the practical ways to actually assess in treaty reporting is to provide a guide around indicators. And we're here this week to validate the final product before we finalise and get it to the government.

INDIRA STEWART: So just to clarify, when you say treaty reporting, are you saying in terms of reporting on human rights?

RN: That's correct. As you are aware there are nine core human rights treaties and Pacific Island countries are state parties to at least two or three of the core treaties. And part of the obligations of being state parties is you need to report on progresses that have happened in a significant number of areas. And so these indicators provide a guide to Pacific states as they prepare to report, to keep measuring. Unless the countries have actually ratified a treaty, they are not obliged to report on it. So this is part of the legal obligations of ratification. They submit a four-year periodic report. So it is these periodic reports that are required to be submitted to the Human Rights Council, committees or the expert committees, that we often face numerous challenges in. And so, these indicators then  are hoping to provide that pointer. They are also universal indicators but we're hoping to contextualise it more to the Pacific. There are minimum universal standards and we work on those bases to ensure that we are able to capture the data that is required.

RN: Yes, you know, we have cultural practices and cultural rights are protected rights and so it's about how you communicate that, how you translate that, I guess, in terms of your own reporting. And so, you'll see that in the treaties, countries are required to engage on different aspects of culture and of course, looking at cultural practices that may challenge the spirit  of the treaties and then how do you address that and how do you react to that. And so, in terms of cultural context, we are also trying to see what aspects of cultural context we can write indicators for.

IS: Do you foresee that the Pacific region will endeavour to sign and ratify the remaining human rights treaties?

RN: That's actually a great question, it's a question that we continue to even put to governments at our consultations. But it's one thing to actually ratify treaties, it's another then to meet, for example, especially the reporting obligations. A lot of the treaties, even though that they have not yet ratified like torture etc are already enshrined protections in national legislations and national constitutions. And so for most of them, it's just a burden, a financial burden that comes I guess, with reporting. Because that's a big work. We're talking about countries with limited technical expertise around reporting, limited financial expertise. But again, as I've said earlier, over the years we see that there' s a lot of improvements to that. So I do see that countries, as they confront the issue of reporting, will actually move to ratifying treaties. But it's really a lot of consideration and factors to be taken in to before states should actually move into ratification.